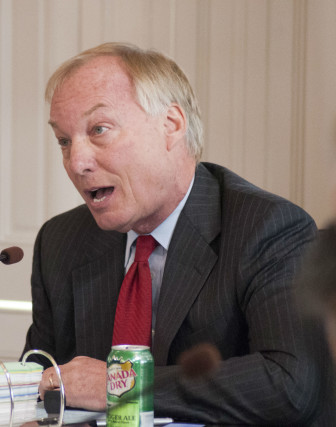 COMPTROLLER MISDIRECTED $21.4 MILLION: Maryland’s chief tax collector said Wednesday that his office accidentally misdirected $21.4 million of local income tax payments for years, a mistake that affects nearly every municipality in the state. Comptroller Peter Franchot told a panel of state lawmakers that the scope of misdirected tax payments was broader than he previously thought, Erin Cox is reporting in the Sun. State auditors reported in September that the comptroller’s office had sent $8.7 million to the wrong municipalities in Montgomery County.

BLACK DRIVERS SEARCHED AT HIGHER RATES: Black motorists in Maryland are stopped and searched by police at higher rates than their white counterparts, despite being less likely in many jurisdictions to be found with illicit drugs or other contraband, according to statewide traffic stop data reported by Kevin Rector in the Sun.

UBER, LYFT FACE TOUGHER REGS: Popular ride-hailing companies Uber and Lyft will plead their case today before the Maryland Public Service Commission that they should not be required to fingerprint drivers. Sarah Gantz of the Sun is reporting that fingerprinting is a standard part of the background check process for taxicab drivers and many other professionals licensed by the state. But Uber and Lyft argue fingerprint-based background checks are less accurate than their own private systems and discriminate against minorities who are more likely to be in the criminal record system following an arrest, even if never convicted.

STATE SEEKS CURBS ON OTHERS’ COAL PLANTS: Maryland environmental regulators are asking their federal counterparts to crack down on 19 coal plants in five other states whose emissions — carried hundreds of miles by the wind — make the air here unhealthy to breathe on hot summer days, Scott Dance reports for the Sun. The plants have spent billions of dollars on technology to reduce pollution, but according to Maryland officials, they don’t use it every day during the summer, when heat and sunshine cause the pollutant ozone to form and make air quality its worst.

PEPCO GETS RATE HIKE: The Maryland Public Service Commission has approved a rate hike for Pepco, which provides electricity to two suburban D.C. counties. The commission issued an order Tuesday granting a revenue increase of $52.5 million to Pepco. The increase, which will add about $6.96, or 4.76% to the average residential monthly bill, took effect on Tuesday. Pepco had sought an increase of $126.8 million. The AP story appears in the Daily Record.

2 NAMED TO Balt. Co. COURT: Gov. Larry Hogan has appointed two attorneys to join the bench in Baltimore County Circuit Court, writes Pamela Wood in the Sun. C. Carey Deeley Jr. and Dennis M. Robinson Jr. have “a wealth of legal knowledge and experience” that prepares them well to be judges, Hogan said in a statement Wednesday.

KOPP TELLS HOGAN: KEEP OPPOSING TRUMP: Maryland’s Democratic treasurer called on Republican Gov. Larry Hogan on Wednesday to continue his “open opposition” to Donald Trump, whose surprise election last week sparked protests around the nation. Treasurer Nancy Kopp said at the Board of Public Works meeting that she “appreciated” the way Hogan and Democratic Comptroller Peter Franchot did not support Trump, a Republican, during the election, Erin Cox reports in the Sun.

NAACP DENOUNCES TRUMP PICKS: The NAACP took aim Wednesday at President-elect Donald Trump, arguing that several people reportedly guiding his transition into the White House “indicate a disregard for the equal protection of all citizens.” Those people include Frank Gaffney, who has been criticized for his positions on Islam, and alt-right favorite Steve Bannon, John Fritze writes in the Sun.

TRUMP IS WHAT HE SAYS: In this op-ed for MarylandReporter.com, Del. Eric Luedtke of Montgomery County takes issue with Del. Trent Kittleman’s opinion piece that, as president, Donald Trump will moderate his hateful campaign rhetoric, end his fear-mongering and become more presidential. There is no evidence to back it up Luedtke writes, and his appointment of alt-right hero Steve Bannon only reinforces this.

PREDICTABLE POPULIST MOVEMENTS: Professor Todd Eberly of St. Mary’s College writes in an analysis in MarylandReporter.com that whenever national difficulties mount, popular anger focuses on professional governing elites. Contrary to accepted opinion with regard to the current era, these populist uprisings are in fact an established aspect of the current American political system. A system not marked by unpredictability, but rather by an era of stability in which the elections of 1974, 1980, 1994, 2006 and 2010 – in which popular discontent led to major electoral shifts — are recurrent features of a larger electoral pattern.

EVEN LONGER RIGGED VOTING: Please vote today and every day till Black Friday, Nov. 25. You can do just that voting for MarylandReporter.com as the “most informative” website in the Baltimore Sun’s annual Mobbies contest. This is an audience building tool for the Sun, but MarylandReporter.com actually won in 2013. No idea who nominated us this time, or who left off one of our potential competitors. Sounds like an ideal contest for 2016, don’t you think? You don’t have to be a citizen, you don’t have to be 18, you don’t have to be from Maryland. Let’s show ’em who can stuff the ballot box. Vote here. Early and often.

CARDIN TARGET RUSSIA CYBER ATTACKS: Sen. Ben Cardin, the top-ranking Democrat on the Senate Foreign Relations Committee, will unveil legislation today that he said will respond to Russia’s alleged cyber attacks during the presidential election as well as Moscow’s involvement in Syria and Ukraine, John Fritze reports for the Sun.

O’MALLEY DROPS DNC RUN: Less than a week after floating his name for the job, former Gov. Martin O’Malley said Wednesday he will not run to lead the Democratic National Committee, writes John Fritze for the Sun. “While I’m grateful to the supportive friends who have urged me to consider running for DNC chair, I will not be seeking our party’s chairmanship,” O’Malley said in an email to supporters.