ELECTION DAY HOTLINE: On Tuesday, November 8, the American Civil Liberties Union of Maryland will hold the 2016 Election Protection Hotline, where voters can call between 7 a.m. and 8 p.m. with questions about voting or to report problems at the polls. The hotline (410-889-8555) will be answered by ACLU staff trained to assist voters experiencing problems and to investigate complaints at the polls.

ULYSSES CURRIE RETIRES: Ulysses Currie, the sharecropper’s son who rose to the top budget position in the Maryland Senate, resigned Friday after representing Prince George’s County in the General Assembly for nearly 30 years, Michael Dresser reports for the Sun. In a letter to Senate President Mike Miller, Currie said his health would no longer permit him to carry out his duties “with the strength and energy you all deserve.”

REDISTRICTING ON FRONT-BURNER: Gov. Larry Hogan plans another push for creating an independent commission to draw congressional and legislative district lines and stop the partisan gerrymandering that has marked the process in recent decades, reports Len Lazarick for MarylandReporter.com. “I know the governor is still committed to moving forward,” Hogan legislative officer Matthew Palmer told what was supposed to be the final meeting of the governor’s Redistricting Reform Commission on Friday.

STATEWIDE BALLOT ISSUE: Marylanders will vote on one little-debated statewide ballot question this year, reports Michael Dresser of the Sun.  Question 1 is an amendment to the state constitution that would change the way the comptroller and attorney general are replaced if they leave office before their terms expire. If approved, it would require the governor to name a replacement from the political party that won the office in the previous election. The Maryland Constitution currently allows the governor to fill both offices with the candidate of his choice.

LURING FORTUNE 500: The Maryland Department of Commerce wants to bring at least one Fortune 500 company to Maryland within the next two years, shifting gears from a primary focus of retaining businesses in the state, Holden Wilen reports for the Baltimore Business Journal.

HARRIS LEADS GOP ON ELECTION NIGHT: Rep. Andy Harris, Maryland’s lone Republican member of Congress, will monitor election results with the GOP faithful on Tuesday night in a hotel ballroom near Baltimore-Washington International Marshall Airport. Gov. Larry Hogan, the Republicans’ de facto state leader and perhaps Maryland’s most popular politician, is not expected to be part of the crowd, report Ovetta Wiggins for the Post.

THE GRUMP FACTOR: Grumpy voters angry at the political establishment have played a leading role in the drama of this year’s national election. But it’s not clear whether the ire runs deep enough to affect local governments in our region, Bill Turque of the Post reports on three D.C. jurisdictions, including Montgomery and Prince George’s County, which have referendums on the ballot.

MARYLAND BALLOTS TO BE AUDITED: Maryland will conduct a post-election audit of all of the votes cast in the general election, writes Michael Dresser of the Sun. The Maryland State Board of Elections has hired a Boston-based company, Clear Ballot, to conduct a performance audit of the paper ballot system the state adopted this year. State election officials said the audit is not the same as a recount.

KEEPING POLLS RUNNING: Jon Kelvey of the Carroll County Times writes that Katherine Berry has worked with the Carroll County Board of Elections since 2006 and was appointed election director for the county in 2015. If early voting is any indication — Berry said nearly 14% of registered voters in Carroll took part in early voting — a lot of democratic enthusiasm should be on display at the polls on Tuesday. The Times spoke with Berry to see how the Board of Elections were keeping the elections running smoothly.

GARRETT EXPECTS BIG TURNOUT: Garrett countians are expected to turn out in big numbers on Election Day, much like they did during Maryland’s early voting period, the county’s board of elections director said. “I think the polls are going to be just as busy as they were for early voting,” said Steven Frantz, who noted nice weather is in the forecast, which will also lead to strong poll numbers. More than 17% (3,411) of the county’s 19,796 eligible voters cast ballots before Election Day, Frantz said, breaking the previous high of 1,900 in the 2012 general election, Elaine Blaisdell writes in the Cumberland Times-News.

ELECTION JUDGES:  Sisters Mavin Gossard and Marilyn Ashcraft were raised to value the importance of voting. Their father, the late Marvin Abbott, was a precinct leader in Downsville and got them involved in working elections. Now the two are elections workers and will be at the Washington County polling place on Tuesday, writes Janet Helm in the Hagerstown Herald-Mail.

WRONG BALLOTS IN MO CO: A small number of voters received the wrong ballot when they went to cast their vote at some of Montgomery County’s early voting centers, County election officials said last week. Glynis Kazanjian writes in the Sentinel that since early voting centers are open to all citizens, regardless of the precinct they are registered in, voting staff must identify the correct ballot for each voter when they check into the polls. “We have received several complaints of sporadic instances of this occurring,” said Marjorie Roher, a Montgomery County Board of Elections spokeswoman. “It certainly is not in any case widespread as far as we know.”

SOME WILL MISS THE CAMPAIGN: It has been a polarizing and sometimes uncomfortable campaign for president, but Democrat Beverly Wilson and Republican Gary Collins will miss the election when it’s over. The endless political analysis on cable news has been a soundtrack playing in the background for months. Come next weekend, Wilson, a Clinton backer, said, it won’t be the same. Collins, who has helped organize volunteers for Donald Trump in Baltimore City, doesn’t agree with Wilson’s politics but he, too, will lament the end of the campaign, John Fritze writes in the Sun.

NO RED MIRACLES IN BLUE MARYLAND: Political pundit Barry Rascovar, writing in a column in MarylandReporter.com, opines that in blue blue Maryland Donald Trump (for president) and Kathy Szeliga (for U.S. Senate) need a miracle-and-a-half to win in the Free State this year.

LOCAL COVERAGE LOSERS: J.H. Snider writes in the Huffington Post that during the last two years, media of all stripes have regularly covered Hillary Clinton’s email practices. But widespread similar email practices by local government officials have been treated, at best, with a yawn; at worst, by sweeping them under the rug. Covering a presidential election has huge economies of scale, as the audience for a presidential election is the entire nation: some 325 million people. In contrast, there are 89,000 local governments in the United States. Thoroughly investigating an email scandal at the local and national levels may cost the same but the market for that information is much smaller locally.

O’MALLEY TO TEACH AT BC: Former Gov. Martin O’Malley will teach and lecture at Boston College this spring as the Rappaport Center for Law and Public Policy’s distinguished visiting professor, Sophie Reardon reports in BC’s independent student newspaper, The Heights. O’Malley will teach Leadership and Data Driven Government, which will be offered to graduate students at BC Law School. He will also appear in several panel discussions as part of the Rappaport Distinguished Public Policy Series. Previous distinguished visitors for the series include Wendy Sherman, Under Secretary of State for Political Affairs and lead negotiator of the Iran nuclear deal. [EDITOR’S NOTE: Sherman managed Barbara Mikulski’s first Senate campaign in 1986; O’Malley was field director for that campaign.] 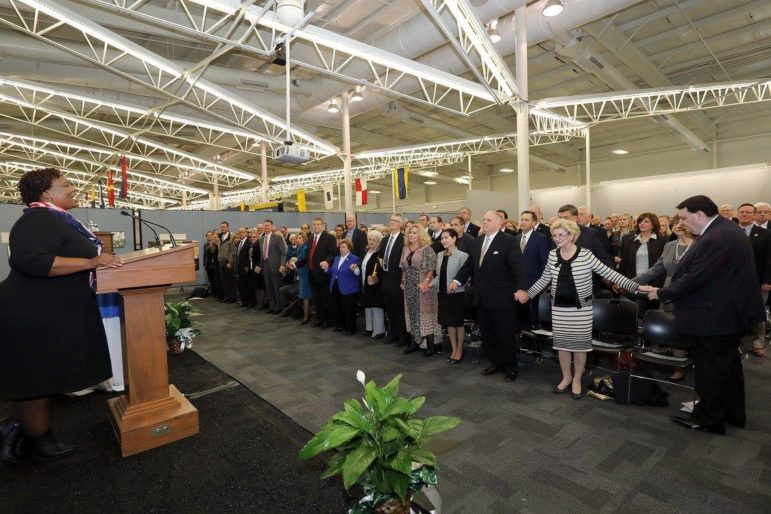 BENTLEY MEMORIALIZED: Maryland gave Helen Delich Bentley a formal send-off Friday at two memorial services dominated by laughter rather than tears. Several hundred invited guests gathered at the Cruise Maryland Terminal in the Helen Delich Bentley Port of Baltimore on Friday morning to remember the former congresswoman, who died Aug. 6 of brain cancer at age 92. There were prayers. There were patriotic songs. But mostly there were Helen stories, writes Michael Dresser for the Sun.