$17M FOR ADDICTION TREATMENT: Maryland would be eligible for up to $17 million over two years to expand access to treatment for opioid addiction, according to an estimated breakdown of a $1.1 billion emergency funding request made by President Barack Obama to Congress. Meredith Cohn of the Sun reports the story.

HEALTH INSURANCE FOR MD’s KIDS: Meredith Cohn of the Sun reports that the non-profit community development group Structured Employment Economic Development Corp. will receive $950,000 over the next two years to help find and enroll children who are eligible for public health insurance in Maryland, officials from the U.S. Centers for Medicare and Medicaid Services.

REGULATORS CONTINUE WRESTLING OVER RX POT: State regulators tasked with developing Maryland’s medical marijuana program are wrestling with questions about how best to vet the financial histories of those seeking licenses. The policy committee of the Medical Cannabis Commission heard public comment Tuesday on a slew of proposed revisions to the nascent program. Many of the revisions are technical or to correct typographical errors, but, writes Daniel Leaderman in the Daily Record, others deal with the complexities of a process that’s sanctioned by the state but still forbidden by the federal government.

REDUCING TESTING EFFORT: Anyone hoping that the state commission on school testing would substantially reduce the amount of standardized testing in public schools already knew that was not going to happen, writes Len Lazarick for MarylandReporter.com. But as the commission put the finishing touches Tuesday on its final report, members believed their findings and recommendations could significantly improve how tests are given, and eventually reduce the time and effort put into tests that don’t contribute to student learning or instruction.

2 HIGH SCHOOLS TO LAUNCH COLLEGE INITIATIVE: Gov. Larry Hogan on Tuesday named the two high schools in Baltimore that will be the first in the state to launch an innovative, six-year program that combines high school, college courses and work experience. Starting this fall, Carver-Vocational Technical High School and Dunbar High School will be the sites of the new Pathways in Technology Early College High Schools, Ovetta Wiggins of the Post is reporting.

CITY ELECTION PROBLEMS: Maryland and Baltimore elections officials told a state Senate committee on Tuesday that they’re working through the staffing, training and logistical problems that led last month to temporary decertification of the city’s primary results, Josh Hicks writes in the Post. 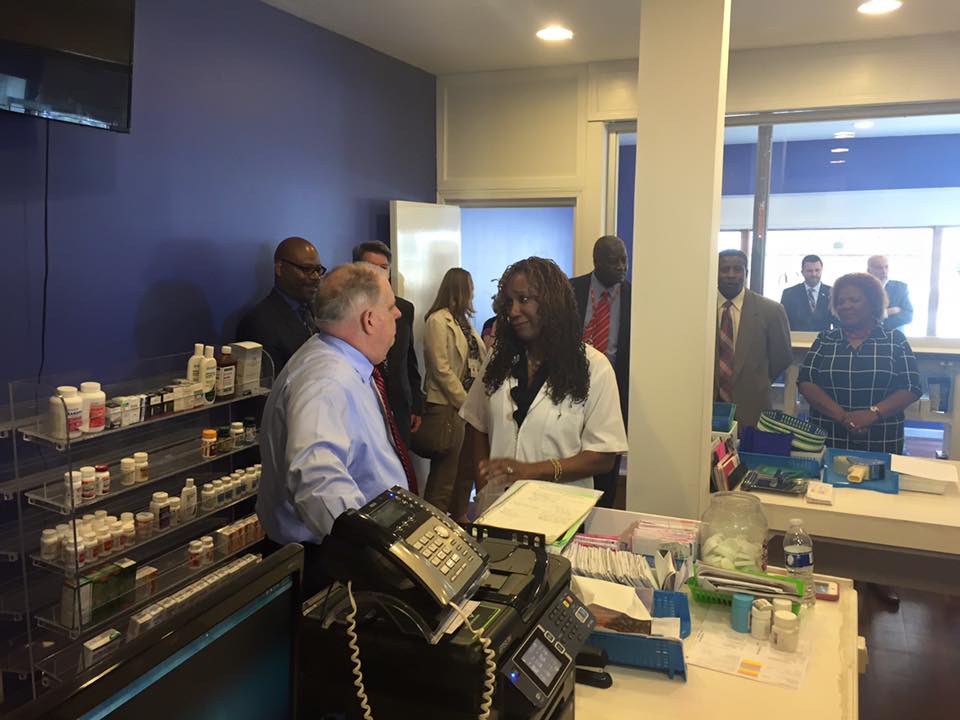 Gov. Larry Hogan talks to the owner of the Breath 4 Sure Pharmacy in West Baltimore that was rebuilt with a state business loan after being looted in the April 2015 riots. Photo by Governor’s Office.

SANDTOWN SKEPTICS: As Gov. Larry Hogan played tag with kids in West Baltimore Tuesday, Nneka Nnamdi watched from the sidewalk and muttered curse words under her breath. Six months ago, when he announced a multimillion-dollar plan to tear down the city’s vacant houses and replace them with green space or new development. On Tuesday, he came to tout that program and others that he says will help the city. Nnamdi, 39, and other West Baltimore residents were skeptical, reports Erin Cox in the Sun.

O’DONNELL’S PSC NOMINATION: The editorial board for the Sun opines that Del. Anthony O’Donnell has been a reliable skeptic of climate change. In 2009, he was a floor leader in the Republican effort to turn back or neuter a law requiring utilities to reduce greenhouse gas emissions. Small wonder that the Southern Maryland resident’s recent nomination by Gov. Larry Hogan to serve on the Maryland Public Service Commission got a thumbs down by environmentalists. But if the decision to be made is whether O’Donnell’s views should preclude him from service, we are deeply skeptical. And that doesn’t mean O’Donnell doesn’t deserve a thorough grilling by members of the nominating committee.

HOPE IN PORT COVINGTON: Officials and legislators in north Anne Arundel County have signaled that Port Covington will be a key employer of local residents. In addition, many of the county’s state legislators supported bills this past General Assembly session that looked to lure manufacturers to the state through tax breaks. As part of his “Make it in America” legislative effort, U.S. Rep. Steny Hoyer on Monday outlined his plans to revitalize the manufacturing industry in Baltimore. Hoyer’s plan, which was light on specific funding or legislative methods, focused on advocacy for more education and workforce training, tax incentives for entrepreneurs and assistance for start-up companies.

HOGAN DISTANCES SELF FROM TRUMP: Gov. Larry Hogan (R) continued to try to distance himself from his party’s presumptive presidential nominee on Tuesday, saying he was not aware of Donald Trump’s recent statements on barring Muslim immigrants in the wake of Sunday’s mass shooting in Orlando, reports Ovetta Wiggins for the Post. “I don’t know what his position is,” Hogan said, when asked about Trump’s stance. “I don’t care about Donald Trump. I don’t listen to Donald Trump.”

MOCKING LOCKER ROOM EMAIL: The longtime head of the beach patrol in Ocean City faces disciplinary action after sending an email about locker rooms that appeared to mock Target’s policy allowing transgender customers to use the bathroom of the sex with which they identify, Fenit Nirappil writes in the Post.