HOGAN WELCOME AC MOVE, BUT THEN: Gov. Larry Hogan on Wednesday welcomed Baltimore County’s decision to accelerate plans to install air conditioning in all of its public schools, but refused to back off the Board of Public Works’ decision to withhold school construction money until he sees a written plan, reports Michael Dresser in the Sun. 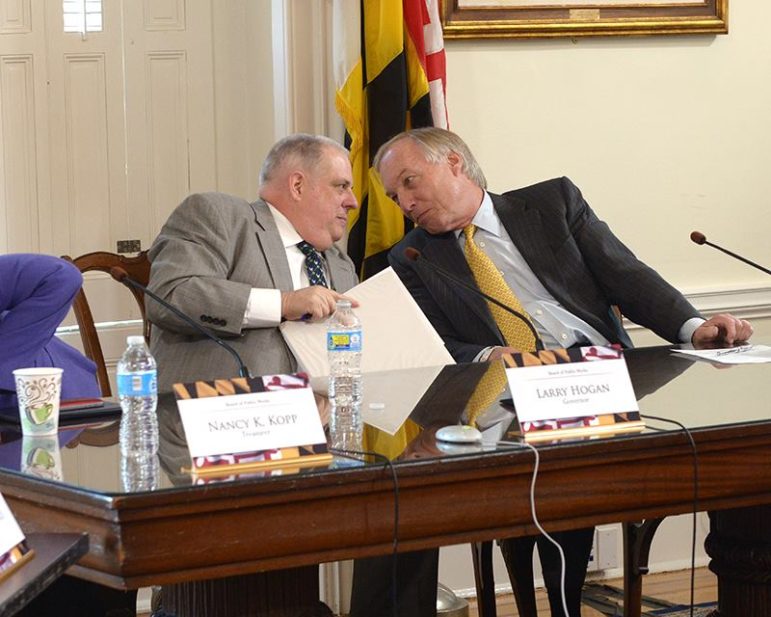 Gov. Larry Hogan and Comptroller Peter Franchot at Wednesday’s Board of Public Works meeting. From the governor’s Facebook page.

100 BILLS LEFT: Gov. Larry Hogan is deciding this week whether to veto roughly 100 bills passed during this year’s General Assembly session that he has so far declined to sign, reports the Sun’s Michael Dresser. He has until Saturday to either block the measures or let them become law. Among them is legislation intended to protect lead paint poisoning victims against attempts to bilk them.

UNCLAIMED BODIES: In an article in MarylandReporter.com, CNS’s Eliana Block writes about  the history of HB1152, which died in committee this year. It sought to extend the grace period from three to 14 days before an unclaimed body becomes Maryland property and is released for use in medical science, as well as grant any willing relative or friend the right of final disposition. That last part made Maryland funeral directors cringe, envisioning hundreds of grief-filled lawsuits fighting over who has rights to a body.

CITY VOTE RE-CERTIFIED; OUTCOME SAME: Baltimore City’s elections board re-certified the results of the April primary election Wednesday after an unusual intervention by state officials. The updated vote totals didn’t change the outcome of any race, writes Ian Duncan in the Sun.  Any candidate who wants a recount now has three days to make a request. Anyone who wants to challenge the outcome of the race in court has seven days to file papers.

BACK TOUTS O’MALLEY AS NEXT DNC CHAIR: As the political vultures circle around the incumbent, a longtime backer and financier of former Gov. Martin O’Malley is touting him as the next chairman of the Democratic National Committee. John P. Coale, whose $500,000 loan helped put O’Malley over the top in his 2006 race against Gov. Bob Ehrlich, tweeted his support Wednesday as speculation swirled that U.S. Rep. Debbie Wasserman Schultz of Florida might be on her way out. Michael Dresser reports the story for the Sun.

POLICE SUE MOSBY FOR DEFAMATION: Two officers charged in the death of Freddie Gray are suing Baltimore State’s Attorney Marilyn Mosby for defamation and invasion of privacy. Sgt. Alicia White and Officer William Porter, who are facing charges of involuntary manslaughter in the 25-year-old’s death last April, filed the lawsuit against Mosby, Baltimore sheriff’s office Maj. Sam Cogen and the state of Maryland on May 2, write Justin Fenton and Kevin Rector in the Sun.