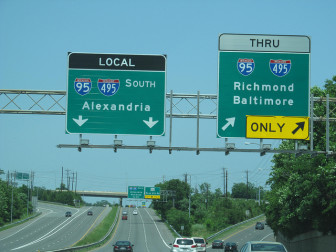 Del. Bob Flanagan was Maryland’s secretary of transportation from 2003 to 2007. In this article, he describes how the current transportation planning process works and compares it under HB1013, Maryland Open Transportation Investment Decision Act of 2016, which the governor vetoed Friday. The House will attempt to override the veto Thursday. It passed both houses just shy of the super-majorities needed to override a veto.

In the accompanying article, “Scoring the transportation  scoring system in HB1013″, Flanagan analyzes the impact of the proposed new scoring system.

The derisive term “wild goose chase” refers to a 16th century horse race in which participants had to follow an erratic lead horse, like wild geese have to follow their leader in formation.

House Bill 1013 establishes a convoluted and poorly defined scoring system for selecting transportation projects. It was vetoed by Gov. Larry Hogan on April Fool’s Day because he does not suffer fools gladly and strongly objected to Democratic Leaders sending the Maryland Department of Transportation on a wasteful wild goose chase.

It is an unavoidable fact that transportation needs will almost always be greater than the funds available to address them. The history of how projects are selected is rooted in Gov. Marvin Mandel’s 1970s era reforms that created a strong executive department. The selection process that emerged from those reforms has been scandal free and generally accepted since its inception.

Annually, under the leadership of the secretary of transportation, a six year Consolidated Transportation Plan (“CTP”) is developed and submitted to the Maryland General Assembly.  The  consolidated plan contains all of the projects selected by MDOT, after extensive collaboration with local government officials and other interested stakeholders.

By Maryland law, the transportation secretary is required to visit each county and Baltimore City and hold public forums on the draft CTP plan and discuss regional and local priorities.

Before these visits in the fall, there is extensive collaboration between professional transportation staff at MDOT and local governments. Each year, every jurisdiction is asked to submit a letter identifying its most important transportation priorities. These priority letters are afforded great deference and are very influential in the selection of projects. This process allows MDOT to evaluate projects based upon the needs that are directly expressed by locally elected officials.

In addition to its excellent track record of working collaboratively with local advocates, MDOT enjoys a national reputation for its commitment to practicing environmental stewardship, supporting community vitality, encouraging pedestrian and bike access, and promoting smart growth. However, this aspect of its work is merely the frosting on the cake.

Safety is always the top priority and is often closely associated with congestion. Fighting congestion is desperately needed in major commuting corridors. Improving mobility means moving people from point A to point B. This  often goes hand in hand with improved safety. Economic development is needed in all parts of the state, even the less congested rural areas.

Maryland is geographically diverse. Challenges and solutions vary dramatically based on different regions. Being flexible and listening to problems from a local point of view has allowed MDOT to build a state wide consensus for its transportation program.

In the 2014 election, Governor Hogan ran on a message that this consensus was deteriorating and that the need to balance transit and highways had been ignored. He has been praised for moving ahead, after careful deliberation, with the Purple Line, an east-west light rail project that will connect Bethesda to New Carrolton. This was Montgomery County and Prince George’s County’s highest priority.

On the other hand, his decision to cancel Baltimore’s gold-plated Red Line, because of hidden risk factors and the likelihood of huge cost overruns in the billions of dollars, was met with anger in the Democratic House and Senate caucuses.

Yet even in Baltimore City, the governor’s decision drew many accolades. He followed up with an expensive initiative to improve bus service in the region.

Refusing Gov. Hogan’s proposal last year to lower transportation taxes, Democrats adopted the attitude that since they raised these taxes, they had the right to decide where and how the money would be spent. Democrats bristled at his announcements that moved funds to high priority highway projects across the state.

In the 2016 Legislative Session, this resentment led to the passage of HB 1013. The bill rightfully was vetoed by the governor. It is scheduled to come before the House Thursday, and then the Senate if the House overrides.

The bill requires each project to be scored in nine categories, each from 1 to 100, for a total of 900 maximum points. Beginning in 2018, the governor must choose projects with higher cumulative scores, unless he gives an acceptable explanation for not doing so to the legislature.

The fact that 2018 is an election year is not a coincidence. The Democrats in Annapolis want to take the voters on their own wild goose chase.

As described in the accompanying guide scoring the new scoring systems, most of the categories prioritize “wants” versus “needs.” At the behest of smart growth special interest groups, it arbitrarily promotes mega-billions of dollars worth of light rail projects in Montgomery County and Baltimore City.

It encourages squabbling amongst different regions of the state and distracts from focusing on MDOT’s core mission.  Clearly, April Fool’s is the campaign theme of choice for Democratic leaders for 2018.