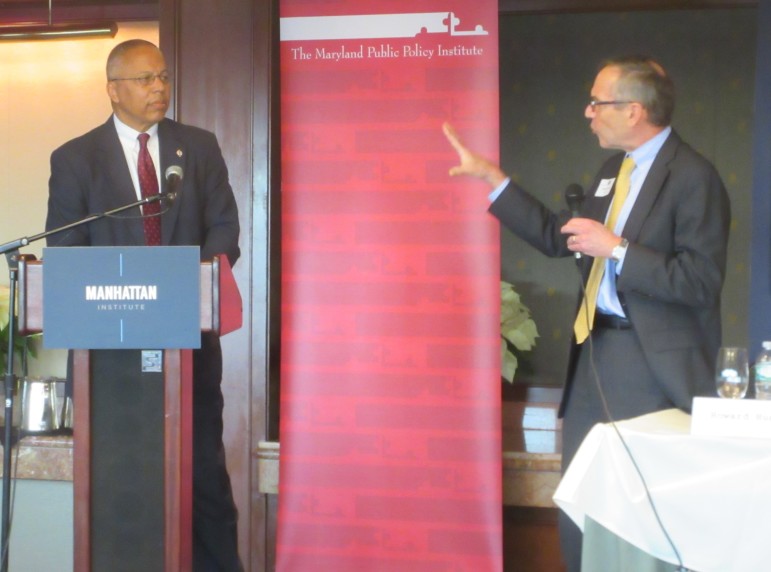 The Hogan administration is jumping with both feet into efforts to reduce the prison population and make re-entry of ex-convicts into society easier by getting them jobs.

Simultaneously with a release from Gov. Larry Hogan, Lt. Gov. Boyd Rutherford announced the formation of a new task force to review the legal barriers that people with a criminal record face when re-entering the community after time in prison.

There are “hundreds of restrictions” on what ex-offenders can do after they get out of prison, Rutherford said. He was the keynote speaker at a conference on “Prison Re-Entry in Maryland” sponsored by the Manhattan Institute and the Maryland Public Policy Institute, two free-market think tanks generally thought of as conservative.

There’s a significant coming together of the political right and left on this issue, said Howard Husock, vice president of policy research at the Manhattan Institute.

Indicating the administration’s high level of interest in the topic, the meeting in Baltimore included three Hogan cabinet secretaries and several of the governor’s top advisers.

“Nationally, two-thirds of individuals released from incarceration will be arrested for a new offense within three years,” said Rutherford. “In our state of Maryland, 58% of the individuals admitted to prison were previously on some type of supervision.”

“It’s time for us to ask ourselves if we are putting the right incentives in place for those released from jail or prison,” he said.

“Are we promoting the types of programs that help individuals find jobs, start their own businesses, and engage with their communities?” Rutherford asked. “Or are we instead creating unnecessary legal and regulatory barriers that inhibit individuals from finding employment and participating in civic society?”

A heroin task force the lieutenant governor had headed  recommended earlier this month that the Governor’s Office of Crime Control and Prevention conduct a study of Maryland laws and regulations that create “collateral consequences,” unnecessary barriers to employment of ex-offenders.

Also as part of administration efforts to reduce the prison population, the Justice Reinvestment Council is supposed to finish its recommendations Thursday. 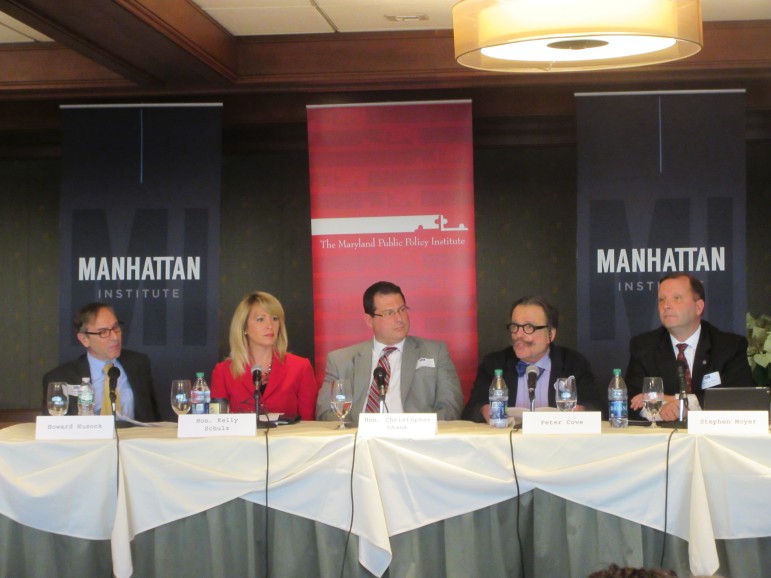 The Baltimore Ex-Offender Reentry Program, funded by the Abell Foundation, had a recidivism rate of 3.3% for 251 people placed in jobs, compared to 40% of ex-offenders not in the program who went back to prison.

“The jobs are there,” said Cover. Many ex-offenders are veterans of street sales in the drug trade, and they’re “very good bull-shitters” and can perform phone sales and other back room business operations.

Maryland Labor Secretary Kelly Schulz said, “I want to agree that there are plenty of jobs available.” An aging population has created shortages in the skilled trades such as electricians, plumbers and other building trades. “We’re in dire need.”

To make it easier for ex-convicts to get jobs, Gov. Hogan signed the Second Chance Act in May allowing ex-prisoners who have fully completed their sentences to petition a court after a waiting period of three years to shield their convictions from disclosure.

The measure was designed to remove some of the stigma of a previous conviction if the person stays out of trouble.

Many Republicans legislators are not as enthusiastic as Hogan and Rutherford about the law, which was sponsored by Del. Curt Anderson, D-Baltimore City. Only one Republican in the House of Delegates voted for the bill, Del. Chris West of Towson, while 47 Republicans and 9 Democrats voted against it.

It was a different story in the Senate, where it passed unanimously, all 14 Republicans voting for the same measure.

Many people involved in helping ex-prisoners find jobs were among the 80 people who attended the Manhattan Institute-MPPI conference.

One of them, Ellsworth Johnson-Bey, founder of the Fraternal Order of Ex-Offenders (FOXO), said that working for “no entry” into the prison system is better than working on re-entry.

Public Safety Secretary Stephen Moyer, who oversees the prison system, agreed that finding ways to keep people out of prison is better than incarceration.

“Once you’re in the system, it’s hard to get out,” Moyer said.