LAWMAKERS ASK FOR TOUGHER LEAD PAINT MONITORING: State and Baltimore City regulators need to do a better job enforcing laws meant to protect children from lead poisoning if the longtime health scourge is ever to be eliminated, key lawmakers and community leaders said Monday. Timothy  Wheeler and Luke Broadwater of the Sun write that,  reacting to a Baltimore Sun investigation that found breakdowns in state and city oversight of rental housing containing lead-based paint, they questioned whether the enforcement effort is being managed properly and whether enough money is being spent.

BEEKEEPERS CONTINUE TO SEEK PESTICIDE RESTRICTIONS: Maryland beekeepers are again hoping that the state’s legislature passes a bill in 2016 to label a class of pesticides, neonicotinoids, as harmful to bees and restrict sales of the chemicals to commercial and agricultural applicators. In 2012, Maryland has lost 60% of its bee population to colony collapse disease, twice the national average.  The Maryland Pesticide Network pushed for the Pollinator Protection Act in 2015 after nearly a decade of concern about bee deaths as reported here last year, writes the Bay Journal’s Rona Kobell in MarylandReporter.com.

CHANGES IN INTERNAL POLICE PROBE SOUGHT: A Maryland panel that is reviewing policing practices plans to recommend substantial changes in how quickly officers must cooperate with internal investigations and the amount of time the public has to file brutality complaints, reports Ovetta Wiggins in the Post.

SAYLOR COMMISSION REPORT RELEASED: A governor’s commission created after the death of Ethan Saylor, a man with Down syndrome, released its annual report last week, highlighting changes in disability awareness training for Maryland police agencies. In 2015, the commission helped create a training program for all entry-level cadets in the state. The commission also crafted a shorter four-hour training program that will be provided to veteran law enforcement officers beginning in January 2016, writes Danielle Gaines for the Frederick News Post.

BIZ PANEL MULLS TAX HIKES: A commission charged with making Maryland more business-friendly by recommending tax cuts is also considering increases to three controversial taxes, writes Bryan Sears for the Daily Record. The proposed increases to the state’s gas, tobacco and alcohol taxes are among the options weighed by the commission as well as reductions to some personal income tax rates and speeding up the rate at which Maryland re-couples its estate tax with the lower federal rate. 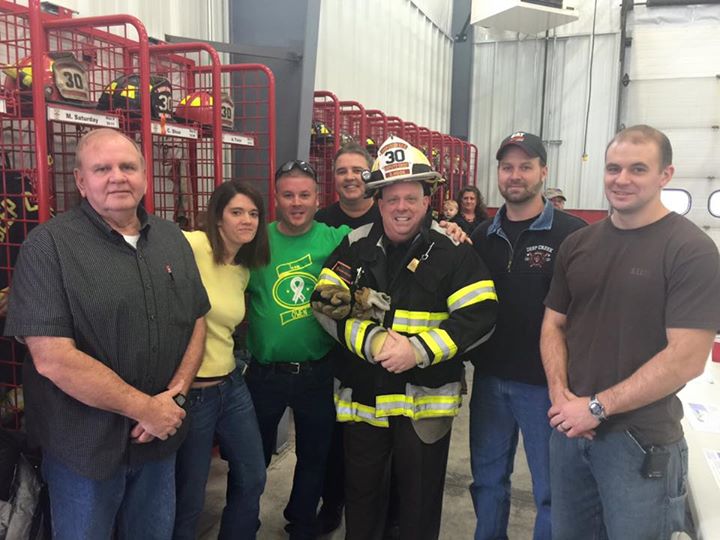 Adding to our Hogan in hats collection, the governor visited the Deep Creek Volunteer Fire Company as part of his Western Maryland tour.

LOH WANTS BYRD STADIUM RENAMED: The president of the University of Maryland, College Park wants to change the name of the campus’s Byrd Stadium to “Maryland Stadium.” Daniel Leaderman of the Daily Record reports that President Wallace D. Loh has asked the University System of Maryland’s Board of Regents to approve the name change because former President H.C. “Curly” Byrd was “an ardent proponent of racial segregation and discrimination,” he wrote Monday in a letter to the campus community.

JUDGES TO FILE AS SLATE: The six sitting Baltimore City Circuit Court judges up for re-election will formally file as a slate Wednesday in Annapolis, according to a story in the Daily Record. Judges Shannon E. Avery, Audrey J.S. Carrion, Michael A. DiPietro, Karen Chaya Friedman, Wanda Keyes Heard and Cynthia H. Jones are running on the campaign slogan “We are Baltimore,” according to the campaign.

BALTIMORE POLS BACK VAN HOLLEN: Baltimore City Council President Jack Young said Monday that he has spoken with Rep. Elijah E. Cummings and was assured that the popular Democrat is not running for Senate. Young joined with other prominent Baltimore African American elected officials in Mount Vernon to endorse Rep. Chris Van Hollen’s campaign to succeed Sen. Barbara Mikulski, who will retire in 2017. State Sen. Nathaniel J. McFadden and Del. Talmadge Branch, the House Majority Whip, were among those also backing Van Hollen on Monday, writes John Fritze for the Sun.