HOGAN PUSHES VISION FOR BALTIMORE: In an op-ed for the Sun, Gov. Larry Hogan addresses the future of Baltimore City, which he says includes tearing down blocks of empty unkempt housing and creating parks and open spaces, improving transportation and job creation.

CONFEDERATE MONUMENTS ISSUE: The Confederate Soldiers and Sailors Monument in Bolton Hill was tagged recently with the message: “Black Lives Matter.” Activists have called for the city of Baltimore to take down the Robert E. Lee and  Stonewall Jackson Monument in Wyman Park Dell, reports Ed Gunts in Baltimore Brew. Exactly three months after the June 17 shootings in Charleston, S.C., prompted cities across the country to reevaluate the way they display statues and monuments associated with the Confederacy, a new public commission has formed in Baltimore to look at what the city should do with its Confederate monuments.

ENCOURAGE MEDICAL MARIJUANA: Communities across the state have been debating whether or not to allow growers of medical marijuana into their communities, and the discussions have been more or less enlightened, depending on where you live, opines the editorial board for the Frederick News Post. Kent and Washington counties support it, and Baltimore County has passed zoning laws for growing, processing and distributing. Anne Arundel County Executive Steve Schuh — as an example of one of the less enlightened, the editorial writes  — wants to ban it, even though the first specialty clinic with three consultants and three physicians opened in Annapolis in June, and by August had seen more than 100 prospective patients.

POLICE BODY CAMS A GOOD CHOICE: The editorial board for the Sun praises Baltimore County Executive Kevin Kamenetz, writing that Kamenetz’s decision to equip county police officers with body cameras reflects a wise determination to be proactive on the issue of police misconduct.

MARYLAND SEEKS FEDERAL SUIT POSTPONEMENT: Maryland is urging the U.S. Supreme Court to postpone, pending the completion of administrative review, a prisoner’s federal lawsuit alleging a guard roughed him up in a Baltimore jail, Steve Lash of the Daily Record reports. In a petition to the high court, Attorney General Brian Frosh argues that Shaidon Blake’s lawsuit against the guard should be dismissed because Blake had failed to exhaust Maryland administrative complaint procedure before filing suit, as required under the federal 1996 Prison Litigation Reform Act.

DEL. PROCTOR EULOGIZED: The steady stream of cars turning into the driveway of St. Mary’s of Piscataway Catholic Church in Clinton seemed to never end. By 10 a.m., the lots were full and cars were parking on the lawn. The enormous turnout on this sunny Saturday morning was for the funeral of longtime Maryland House delegate James E. Proctor Jr. of Accokeek, who died Sept. 10 at age 79, Joe Heim writes for the Post.

LOESCHKE’S LIFE HONORED: They sang, danced and told stories about Maravene Loeschke at Towson University on Friday, as hundreds celebrated the life of the late university president described as warm, energetic and intensely focused on students, Liz Bowie writes in the Sun. Loeschke died of cancer June 25 at age 68, after stepping down as president in December. During a career in higher education that spanned 45 years, she was a Towson University student, professor, chair of the department of theater arts and dean. She became president of the institution in 2012. She also held positions at two other universities.

DAVIS ENDORSED FOR 4TH CONGRESSIONAL SEAT: Democrat Del. Dereck E. Davis, running for Maryland’s 4th Congressional District, picked up the endorsement of a well-known Prince George’s County councilman on Saturday as well as more than a dozen members of the General Assembly, John Fritze reports for the Sun. 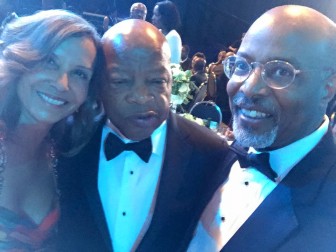 DISTRICT 8 CANDIDATES PRO-IRAN DEAL: All but one of the six candidates seeking the Democratic nomination from District 8 said this week that, were they currently seated in Congress, they would have voted in favor of the controversial agreement on Iran’s nuclear capabilities negotiated by the Obama administration, Louis Peck of Bethesda Beat reports. Only the latest entrant in the Democratic primary contest, David Anderson of Potomac — an official of a Washington-based internship and seminar program — said he would have voted against the deal, declaring that “the United States can and should do better.”

VAN HOLLEN PRAISES TRUMP: Rachel Weiner of the Post writes that the top Democrat on the House Budget Committee praised Donald Trump on Friday for wanting to get rid of a tax loophole that benefits private equity and hedge fund managers. “I’m pleased to see Donald Trump embrace the idea of eliminating the carried-interest loophole,” Rep. Chris Van Hollen (D-Md.) said at a breakfast hosted by the Christian Science Monitor. “Unfortunately, the rest of the Trump phenomenon, I think, has been a sort of .?.?. difficult to explain moment in American politics.”

ENGLISH ONLY PRESSURE: While emails reveal concern from county council members about outside influences during the debate this summer over the repeal of Frederick County’s English Ordinance, officials say outside pressure on the local policy decision has generally not been a major concern. The County Council voted in August by a 4-3 margin to repeal a 2012 English ordinance, writes Kelsi Loos for the Frederick News Post.

WHAT’S NEXT FOR SRB CAMPAIGN FUND: Baltimore City Mayor Stephanie Rawlings-Blake, who recently declared that she won’t seek re-election, has $365,000 in her campaign account. What will she do with that money? Aides say she is likely to transfer some to political allies who are running for office, Luke Broadwater writes for the Sun.

KAMENETZ ISN’T THE PROBLEM: In MarylandReporter.com, columnist Barry Rascovar writes that, in what could be a preview for the 2018 gubernatorial election, Gov. Larry Hogan and Baltimore County Executive Kevin Kamenetz are going at it. Hogan and Comptroller Peter Franchot,  his tag-team partner in beating up on unsuspecting officials at BPW meetings, blame Kamenetz for allowing thousands of county children to swelter because their schools lack A/C. Four dozen Baltimore County schools have no air-conditioning, which is shameful. But Kamenetz is not to blame, nor is current county Schools Superintendent Dallas Dance.