We’re off Monday, Labor Day; Roundup will return on Tuesday.

$295 MILLION SURPLUS: Buoyed by a surge in tax collections, Maryland finished the year with a $295 million budget surplus, new figures show. Timothy Wheeler of the Sun writes that the state’s comptroller and governor differed Thursday over whether that means the state’s economy has rebounded, but agreed it’s not time to loosen the reins on state spending. Tax revenues jumped 5.1% in the past year, Comptroller Peter Franchot announced. The state closed out its fiscal 2015 budget with $15.9 billion in revenue, which was $214 million more than officials had forecast would come in. The biggest chunk of the increase came from higher personal income tax collections.

SAT SCORES FALL: Scores for Maryland’s graduating high school seniors on SAT tests have declined for the third year in a row, and results released Thursday suggest that less than half of Maryland students are leaving high school ready for college, Liz Bowie and Erica Green report in the Sun.

STANDARDIZED TESTING BLASTED: Standardized testing is chipping away at “so many layers” of a public school classroom these days, a panel of educators said during a town hall meeting — taking away from teacher autonomy to curriculum and even technology hubs placed in schools to help students learn and connect to a high-tech world, writes Melody Simmons from MarylandReporter.com.

MANDEL’S LIFE HONORED AT FUNERAL: To those who followed him into the Maryland governor’s mansion, Marvin Mandel was a wise and generous advisor, regardless of their party affiliation. To the past and present officeholders who gathered for his funeral in Baltimore County on Thursday, he was a master vote-counter and coalition-builder, writes Jean Marbella for the Sun. And to his family? Mandel was a garment-cutter’s son and first in his family to go to college, and a father and grandfather so devoted to his Maryland Terps that he once bit through the stem of his pipe during a particularly stressful game.

DELEGATE TARGETS CHILD ABUSE: Del. Brett Wilson told a new Hagerstown child-abuse prevention group Thursday night that he is looking at ways to help address the problem in a more pro-active way, writes Dave McMillion for the Hagerstown Herald Mail. Wilson talked about two proposals to help reduce child abuse, including early intervention to determine if a family is at risk of falling victim to it.

FROSH CRITICIZES HOGAN: Tamela Baker of the Hagerstown Herald Mail reports that Attorney General Brian Frosh covered a wide range of topics in a talk on Wednesday that included a critique of Gov. Larry Hogan’s administration in which he chided the governor for pulling back on environmental regulations that led to more pollution from power plants and poultry farms. But he spent most of his time  explaining his office and priorities, including defending consumers, protecting the environment, making neighborhoods safer and fighting the heroin epidemic.

DGS-ANNAPOLIS DIRECTOR DISMISSED: An Annapolis man who managed 26 state buildings on 49 acres in the heart of the city, including the State House and governor’s mansion, has been dismissed from the Department of General Services, Tim Prudente reports in the Annapolis Capital. Sam Cook worked seven years as Annapolis director for DGS during two terms of former Gov. Martin O’Malley. He also set the formula to discount pieces of used furniture O’Malley bought when leaving the State House in January, a Sun investigation revealed last week. The family paid $9,638 for the furniture that originally cost taxpayers $62,000, according to documents obtained in the investigation.

PRAISE FOR PORT OF BALTIMORE: Don Fry, a member of the Port of Baltimore Commission,  in a commentary for Center Maryland, praises the economic engine that is the Port of Baltimore. Earlier this week, he writes, the state announced that the port had a record-breaking fiscal year for moving general cargo from its public marine terminals – 9.7 million tons. That’s more than at any other time in its history. The port generates about 14,630 direct jobs, not to mention about $300 million in state and local taxes.

STEALTH WRITE-IN: Bill Turque of the Post writes about a stealth write-in candidacy in the race in Chevy Chase in which undeclared candidate Fred Cecere unseated longtime Town Council member Pat Burda in May by 49 votes, 168 to 119. So what did town of Chevy Chase Mayor Al Lang and Vice Mayor John Bickerman know — and when did they know it? That’s the tone and substance of a report issued this week by a panel tasked with investigating the candidacy. 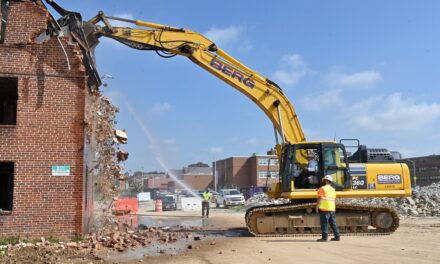