Part 1 of a five part series

Four years after the state declared war on the problem, there is little hard data on its reach and impact in the state. Capital News Service analyzed state arrest records, sent Public Information Act requests to every county and mined police and court files on three dozen criminal investigations from the past decade for details about how victims become trapped, how traffickers operate and how authorities respond locally.

These women’s stories, told in a variety of Maryland courtrooms, are similar.  And chilling.

R, an immigrant in her early 20s with no papers, a third-grade education and a baby girl, entrusted her life to a man she met at a restaurant in Prince George’s County who told her he’d take care of them. Instead, he beat her and threatened to harm her daughter to force her into prostitution.

S, 23, took a bus from St. Louis to Baltimore to work for a man who promised he’d give her a job in his “webcam business.” Arriving on the ticket he paid for, she learned the man was actually a pimp — who told her she’d have to work as a prostitute to pay him back, including a stint in a hotel near Baltimore-Washington Thurgood Marshall International Airport.

C, a 14-year-old runaway, was walking down the street when a man offered her a ride and a place to stay in Clinton. He pampered her, fed her and took her shopping. Then on the third day, he revealed he ran a prostitution business and expected her to work for him. When she messaged friends on Facebook that she wanted out, he became violent.

Their stories, taken from court records, sketch out a common theme: Traffickers find vulnerable young women, seduce them with promises of security, then force them into the sex trade.

When they resist, they are beaten, drugged, threatened with the loss of their children.

And the businesses are everywhere. From a brick house in a quiet neighborhood to a three-star hotel near a swanky mall, sex trafficking has infiltrated the most ordinary of surroundings in Maryland. Behind closed doors, its victims — runaways, single mothers, immigrants, addicts — do what they’re told in unimaginable conditions.

No part of the state immune 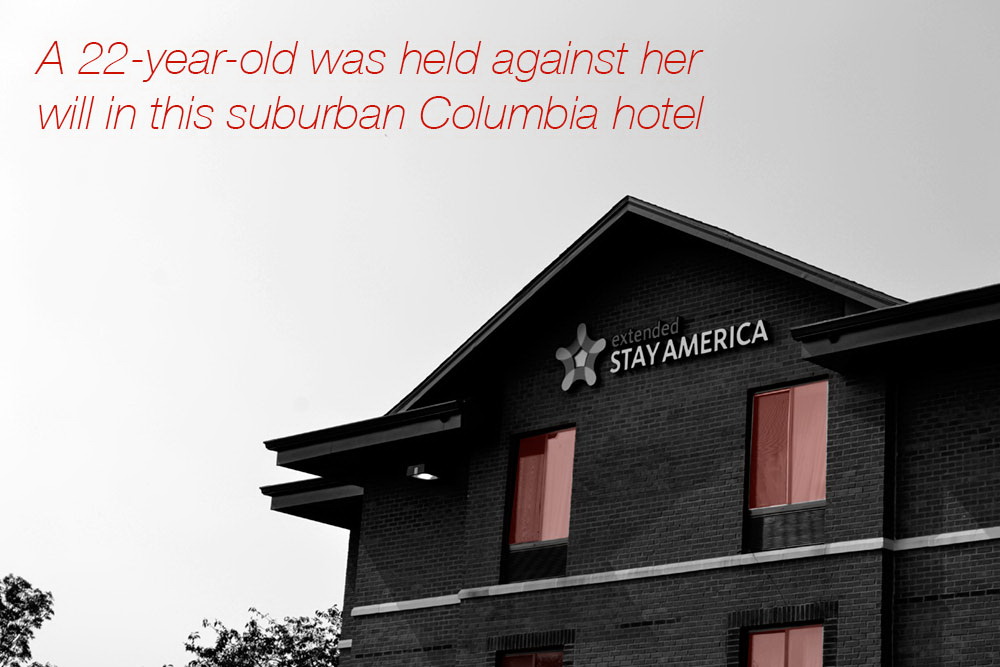 Howard County detectives arrested Rowland Duffey in room 333 at this Columbia hotel and charged him with human trafficking. A 22-year-old woman told police that Duffey had driven her there from Maine against her will, confiscated her cell phone, demanded she have sex with men who responded to his online ads, and hit her when she resisted, records show. She broke free by telling him she needed emergency care for diabetes. When he took her to a hospital, she sought help. Duffey, now 33, was convicted in state court in 2013 on a misdemeanor human trafficking charge. He was sentenced to 10 years in prison. Capital News Service Photo Illustration by Alexis Saunders

“I would say that there isn’t any part of the state that’s immune to this,” said Steven Hess, law enforcement coordinator for the U.S. Attorney’s Office in Baltimore.

Three years ago, Gov. Martin O’Malley unveiled the state’s plan of attack at a gathering of 400 people from state, federal and local agencies. A centerpiece of his plan was an ambitious initiative to collect and share data on human trafficking “from every part of government” — and use it to mount a “coordinated, effective, targeted attack.”

Current and former officials say that little progress has been made on the information-sharing plan.

Initially spearheaded by the state police, the effort has been stalled by staff turnover and slow response by government agencies to requests for information, said Amanda Rodriguez, who stepped down in March as human trafficking policy manager for the Governor’s Office of Crime Control and Prevention.

She now is chief program officer at TurnAround, a nonprofit social services agency in Towson that works with trafficking victims.

Rodriguez and others involved in anti-trafficking work said lack of information has hurt efforts to win adequate resources on state and local levels to fight the problem. Work on human trafficking cases is mostly done by adding on to the responsibilities of people doing other things.

“To be able to ask for funding, we have to be able to support it with numbers,” Rodriguez said.

How the investigation was done

In the absence of a comprehensive state assessment, Capital News Service obtained a state database of human trafficking arrests and sent public records requests to every county in Maryland.

The reporters also mined police and court files on three dozen criminal investigations from the past decade for details about how victims become trapped, how traffickers operate and how authorities respond locally to what law enforcement and victim advocacy groups say is a significant nationwide problem.

The raw numbers that emerge from enforcement data present a mixed picture: Authorities have uncovered extensive evidence of sex trafficking in Maryland but are still struggling to win convictions with it.

Prosecutors filed 274 sex trafficking cases in state courts between January 2010 and December 2014, according to a CNS analysis of data from the Department of Public Safety and Correctional Services.

But most of the rest — 215 — were prosecuted under the misdemeanor trafficking provision of the law. 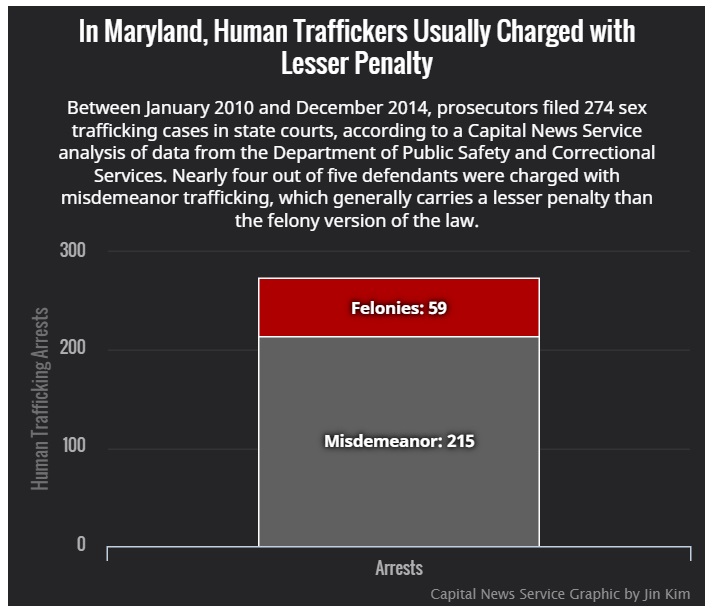 And relatively few defendants were convicted of sex trafficking: Those charges were dropped in two-thirds of the cases. There were two felony and 20 misdemeanor sex trafficking convictions, with 54 cases still open as of December 2014, according to the state’s database.

Federal prosecutions are rarer but more successful. Eighteen cases filed since 2010 — including 11 in which the victims were minors — had resulted in conviction of 21 defendants on federal sex trafficking charges in Maryland.

Many of the federal cases came out of joint investigations between federal and local law enforcement. The U.S attorney’s office coordinates the Maryland Human Trafficking Task Force, which collaborates with local authorities on prosecution of traffickers and provision of services to victims.

Both federal and state human trafficking laws require proof that a pimp used force, fraud or coercion to control a victim in order to convict on a felony charge. If the victim is a minor, coercion is presumed. Otherwise, authorities must prove that the trafficking victims weren’t willing workers.

Proving that often requires the cooperation of victims — and the emotional and financial hold traffickers have over victims was a top reason investigators gave for not producing more trafficking convictions. Other kinds of evidence — cell phone communications and following the money — take time and resources that haven’t materialized.

When police have evidence of force, fraud or coercion, the cases often are pursued in federal court, where the penalties are harsher — up to life in prison.

For federal prosecution, prosecutors may consider whether the crime is multi-jurisdictional, includes factors that increase severity — such as drug violations or violence — or if the defendant is a danger to the community, said Rachel Yasser, assistant U.S. attorney in Baltimore.

So most sex trafficking charges are filed in Maryland state court.

A conviction under the felony provision of the state’s human trafficking law carries a penalty of up to 25 years in prison and a $15,000 fine.

But, more likely, the case will be prosecuted as a misdemeanor, punishable by a maximum of 10 years and $5,000 fine.

Police and prosecutors say they choose that path if they don’t think they can prove the force, threat, coercion or fraud required to win a felony conviction.

“I mean it’s basically a slap on the wrist,” said State Police Sgt. Deborah Flory, whose job includes investigating trafficking cases. “There’s no real penalty. Catching a robbery charge is worse than catching a trafficking charge for an adult.”

That also helps explain why human trafficking charges are dropped in so many cases: Defendants may be convicted on other types of charges — such as prostitution, weapons, drugs or assault that are easier to prove and carry similar or tougher penalties.

Maryland Department of Public Safety officials would not release the full arrest database, which would have allowed CNS to make that determination.

Christine White, head of the research committee for the Prince George’s County Human Trafficking Task Force and a University of Maryland, College Park criminologist, said the enforcement statistics are disheartening several years into a major state push to combat trafficking.

“With all the problems with arrests and prosecuting,” she said, “you wonder are we all on the same page?”