HOGAN  INVITED TO NAACP MARCH: The president of the NAACP Maryland State Conference extended an invitation Wednesday to Gov. Larry Hogan and other state legislators to participate in the national organization’s “America’s Journey for Justice,” an 860-mile march from Selma, Ala., to Washington. At a press conference outside of the NAACP’s Baltimore office, Gerald Stansbury said it was “time to send a message that justice is for all, not just a chosen few.” Talia Richman writes the story for the Sun.

UNFAIR FARES: The editorial board for the Sun addresses the bus fare increases that will impact the working poor — especially those in Baltimore City. The General Assembly mandated periodic fare increases to match inflation as part of the gas tax increase legislation approved two years ago. Lawmakers who supported the tax increase would agree to a fare increase, and revenue would help pay for the proposed Red and Purple light rail lines in Baltimore and suburban Washington. The fare increase is going forward, but how about those much-needed light rail lines and the multi-billion dollar investment in the economy they represent?

ROCKY GAP MERGER: State gaming regulators are expected today to approve two requests by the operators of Rocky Gap Casino in western Maryland to merge with a Las Vegas company and add more than four dozen slot machines to the 2-year-old facility, reports Bryan Sears for the Daily Record.

CASINO’S SURE BET: The Sun editorial board is expecting the casino industry to return to Annapolis to urge lawmakers to make changes in its requirements for operations — giving itself a more favorable situation. But that may not be a bad situation for the state, but maybe gamblers should be consulted as well.

MAYOR-GOV FEUD: Six months ago, Maryland’s incoming Republican governor and the Democratic mayor of Baltimore City went out for dinner in Roland Park. They smiled and posed for photos together. They talked of a “productive” working relationship. Now, rarely a week goes by without Mayor Stephanie Rawlings-Blake speaking harsh criticism of Gov. Larry Hogan — blasting him over a range of decisions including cuts to city school aid and support for rebuilding liquor stores in riot-damaged neighborhoods, Luke Broadwater reports in the Sun.

SUPPORT LETTER QUESTIONED: Chase Cook of the Annapolis Capital reports that Pam Beidle, chairwoman of the Anne Arundel County House Delegation, sent an email in support of a fellow delegate’s campaign for Congress. A response was a call from the Maryland State Ethics Commission. In an message sent out to her supporters, Beidle, D-Linthicum, backed Del. Joseline Peña-Melnyk for Congress in the 4th District for Donna Edwards’ seat. But elected officials can’t campaign for others using state resources.

YOU LIKE HIM! U.S. Rep. Steny Hoyer tweeted ‘thanks’ to his followers Wednesday for his newest achievement:  surpassing 40,000 Facebook likes. But, writes Katelyn Newman for the Daily Record, before we break out the champagne, let’s take a look at the other federal lawmakers that represent Maryland to see how Hoyer’s social media presence stacks up.

O’MALLEY TO ADDRESS CLIMATE CHANGE TOO: As some Catholic candidates seeking the Republican presidential nomination question the pope’s advocacy on climate change, Democratic hopeful Martin O’Malley is embracing it. The former Maryland governor, who is a practicing Catholic, plans to issue a white paper this morning that declares that the United States has a “moral obligation” to address climate change and outlines steps he would take to accelerate a move toward clean energy — including several that build upon Obama administration policies and some that depart from them.

BAKER-COUNCIL RIFT: The rift between Prince George’s County Executive Rushern Baker and the County Council leaves Baker without a willing partner to help him advance his agenda to overhaul schools, which he says is key to attracting new businesses, residents and wealth, writes Arelis Hernandez for the Post.And it threatens to distract from other major projects, including luring a new FBI headquarters to one of two sites in Prince George’s, building a new regional hospital and stimulating other growth that would narrow the economic gap between Prince George’s and its neighbors.

RADON TESTING IN MO CO? A new bill introduced Tuesday by the Montgomery County Council would mandate that local home sellers test for the radioactive gas radon and provide buyers with the results, writes Andrew Metcalf for Bethesda Magazine. The intent of the bill is to help home buyers be aware of the existence of the gas, which can cause serious illnesses and often occurs in single-family homes in the county, according to a memo about the bill provided to council members.

THROWING AWAY BOOKS: Columnist Barry Rascovar, in a repost by MarylandReporter.com, talks about the Baltimore school that, upon closing its doors due to budget cutbacks, decided to throw away its cache of books instead of giving them away to community members.

POLICE WORK SLOWDOWN: Luke Broadwater of the Sun reports that Baltimore City Mayor Stephanie Rawlings-Blake said Wednesday that officers who refuse to do their jobs can face internal discipline. The mayor made clear she is concerned that some officers deliberately may not be doing their jobs. “We know there are some officers who we have some concerns about,” Rawlings-Blake said. “I’ve been very clear with the FOP that their officers, as long as they plan to cash their paycheck, my expectation is that they work.”

AID LIMITS TO SOME: Baltimore City Mayor Stephanie Rawlings-Blake said Wednesday that she will place limits on whether some city liquor stores damaged in April’s rioting can receive state aid,writes Luke Broadwater for the Sun. The mayor has already said that she will not grant city aid to the 23 liquor stores located in residential neighborhoods that suffered damage. But after learning that some of those stores planned to apply for state aid, Rawlings-Blake said she’s seeking to block the flow of that money as well.

GAZETTE READY TO CLOSE: As the Gazette gets ready to close its doors, Kevin James Shay writes about the history of the paper and the affect it has had on the lives of Montgomery County residents. 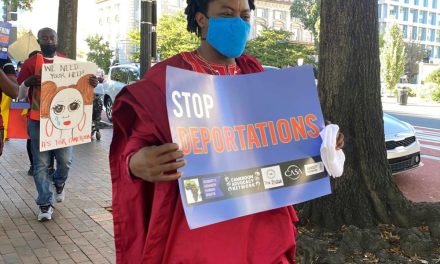