THE SECOND DEBATE: Republican Larry Hogan denounced Democrat Anthony Brown’s handling of Maryland’s health exchange Monday during their second televised debate, calling the website a “complete disaster.” Brown refused to give in, acknowledging that the launch went poorly but pointing to 400,000 Marylanders who obtained health coverage and statistics showing a drop in uncompensated care at Maryland hospitals, Michael Dresser and Erin Cox write in the Sun.

THE REVIEWS ARE IN: Todd Eberly writes in MarylandReporter.com that “the second Maryland gubernatorial debate is in the can (or on the web…) and, for me anyway, the results mirrored the first debate. Both Anthony Brown and Larry Hogan performed well, neither made any serious mistakes, and neither scored any major blows. It was a tie. The debate itself, however, came across as a disorganized mess.”

WILL TAX PLEDGE BACKFIRE? Lt. Gov. Anthony Brown’s campaign pledge to forgo tax increases if elected governor has raised the eyebrows of some who were lining up for such increases and from observers who say the promise paints the Democratic nominee into a corner, reports Bryan Sears for the Daily Record.

A TIGHT RACE: Josh Kurtz of Center Maryland write that whatever you may think of these candidates for governor, it’s probably safe to say that the debates haven’t changed very many people’s minds, if anyone is paying attention. Whether they are or not, what we’re looking at here is a tight election. Republican Larry Hogan seems to have the issue on his side. Voters are most concerned about taxes and spending. Small wonder Democrat Anthony Brown is telling voters, in so many words, to read his lips. There will be no new taxes, he asserts – a promise he may find very difficult to deliver.

A REPUBLICAN YEAR? Columnist Blair Lee writes in the Gazette that by almost all accounts, 2014 is a Republican year. Most presidents lose congressional seats during their mid-term elections and Barack Obama, drowning in the polls, is no exception. But the last three Republican years, nationally, played out differently in Maryland where during a mid-term election, our state and local offices are up for grabs.

NO SMART CHOICE: For all the talk about the economy and fiscal issues, both candidates have managed to avoid giving a true picture of the challenge Maryland faces, and neither has offered voters any way to make an intelligible choice about which one would actually be better at solving it, according to the editorial board for the Sun.

DELANEY, BONGINO ON MANUFACTURING: John Delaney, Democrat, the incumbent U.S. representative from Maryland’s 6th Congressional District, and Dan Bongino, his Republican challenger, shared with the Cumberland Times-News their thoughts about how to increase manufacturing in the country. Michael Sawyers writes the article.

NEGATIVITY ASHORE: Rarely does politics express itself negatively on the Eastern Shore as fiercely or negatively as it does in other places, political experts say. Manners still matter. So, writes Jeremy Cox in the Salisbury Times, when a photo of Del. Norman Conway was digitally altered to show him wearing a ski mask of the sort favored by certain bank robbers, even his opponent called it “shameful.”

HOWARD EXEC DEBATE: The Howard County Times and The Baltimore Sun are hosting a debate Tuesday evening between Howard County executive candidates Allan Kittleman and Courtney Watson. The debate will take place at the Miller Branch library in Ellicott City from 6:30-7:30 p.m.

O’MALLEY’S CRIME FIGHT: The sharp reduction in violent crime that occurred on Martin O’Malley’s watch as mayor of Baltimore is a central theme of the speech he gives as he travels the country and lays the groundwork for a presidential campaign. But, reports John Fritze for the Sun, ongoing criticism from the city’s current mayor could focus attention on an aspect of O’Malley’s crime-fighting record he never mentions in New Hampshire or Iowa: A soaring arrest rate during his tenure in Baltimore that angered civil rights groups and locked the city into a yearslong legal dispute. 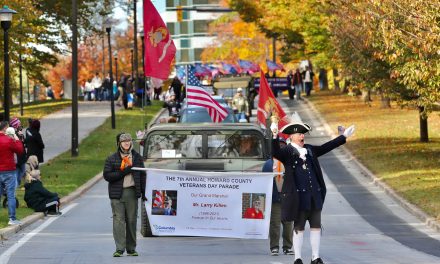