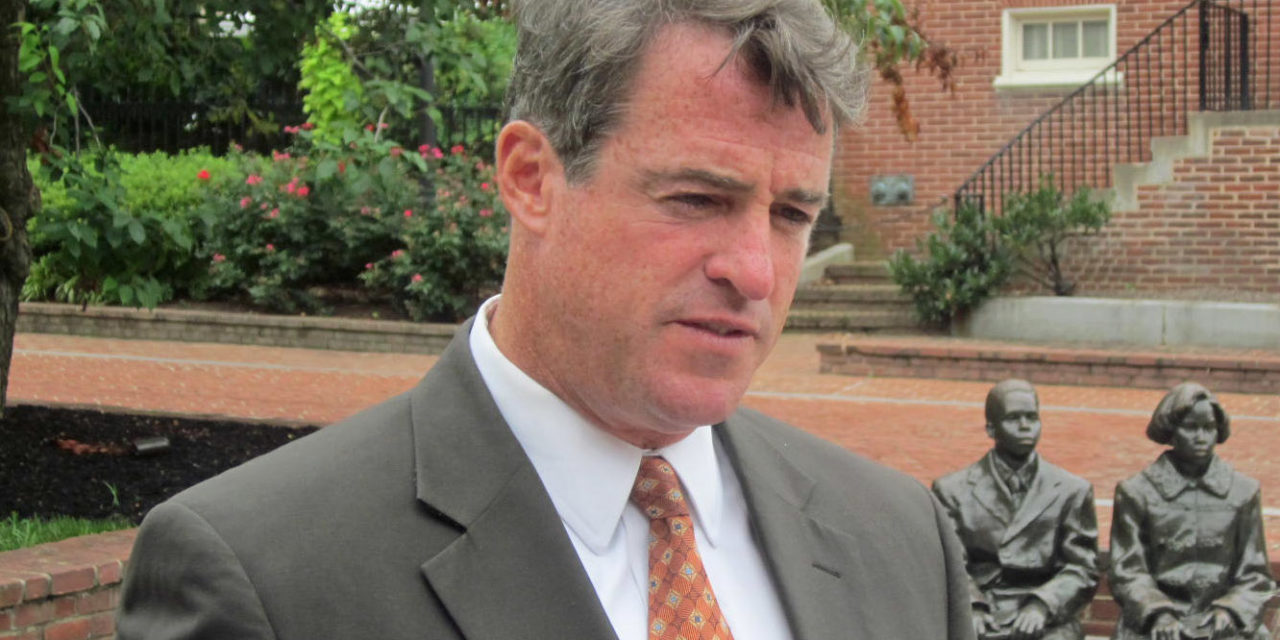 Attorney General Doug Gansler said the chilly cellar at the back of Harry Browne’s restaurant across the street from the State House epitomizes the kind of “back room” dealing his six proposals for greater transparency in government would try to eliminate. (The restaurant’s cozy second floor bar is actually the more common venue for deal-making, but no matter.)

The meeting was the third in “Build Our Best Maryland” series that Gansler is holding around the state to discuss policy issues as he prepares to announce his race for governor in the fall. Some members of the legislature have shown an interest in transparency, accountability and openness in government, but few statewide candidates even mention the topic. A summary of the proposals is at the bottom of this blog.

Gansler cited the study by State Integrity Investigation that gave Maryland a D- on a detailed Corruption Risk Report Card.

Gansler wants to create a new position of public information inspector general in the comptroller’s office, though he’s not sure whether the position should report to the comptroller or just be located there.

“Comptroller Peter Franchot had nothing to do with that” proposal, Gansler said.

to “consolidate existing databases across agencies into one user-friendly, easily navigated portal,” allowing citizens to create their own comparisons.

He also wants meetings of outside parties with state agencies developing regulations to be recorded. In follow up questioning, Gansler said he didn’t want the meetings themselves to be open to the public, but simply recorded for the record.

Gansler said he wants to create an Open Book database “that allows the public to explore state contracts awarded to corporations alongside campaign contributions made by that corporation, its officers or employees.” It was only this year that the legislature passed a law requiring campaign donors to list place of employment.

The session was attended by about a dozen people, mostly technology wonks such as OpenGov Foundation and good government groups such as Common Cause and Maryland PIRG.

The tech folks reacted favorably to the portal, but both MarylandReporter.com and Common Cause’s Jennifer Bevan-Dangel raised problems with the current implementation of Maryland’s Public Information Act, including the withholding of documents and the fees state agencies charge to assemble information. State agencies responses to Public Information Act requests (the state equivalent of the federal Freedom of Information Act) are often guided by assistant attorneys general who do the legal work for the agencies but technically work for Gansler.

Gansler said some of the proposals grew out of his position as a “fiscal conservative and social progressive” to make sure that “we’re spending money efficiently and effectively.”

Gansler mentioned, “We’ve had 40 new taxes” over the last six years, a line that more frequently comes out of the mouth of Republican legislators and GOP candidates for governor. With Franchot no longer looking at a race for governor, Gansler is positioning himself as the fiscal conservative in contrast to Lt. Gov. Anthony Brown, who has fully embraced the record of the O’Malley-Brown administration.

Until this year, Gansler had made no public comment on the tax and fee hikes proposed by Gov. Martin O’Malley and passed by the General Assembly. The attorney general represents them both on legal matters.

“Taxpayers entrust Annapolis with their hard earned money,” Gansler said in a statement. “More needs to be done to ensure that the programs they pay for are delivering for people, not special interests or insiders.”

Below is a brief summary from the campaign of the six points in Gansler’s “Good Government Overhaul for MD” proposals:

1) Public Information Inspector General. At present, Maryland has no statewide agency solely responsible for promoting public access to information. Instead, we allow each administrative agency to set its own transparency standards and disclosure rules.

As a result, Maryland has a spotty transparency record. Additionally, our legislature has the authority via legislative audits to hold executive branch agencies accountable for compliance with accounting practices and StateStat is used to measure agency performance, but both are designed for internal accountability, neither are effective tools for public accountability.

In addition to performance audits, the Inspector General will produce an agency report card identifying areas of improvement and barriers to keeping Maryland transparent and accountable to the public.

2) Comprehensive Open MD Transparency Portal.  Maryland collects a wealth of information, but it is not integrated in a meaningful way nor is it provided in a user-friendly manner.

We should consolidate existing databases across agencies into one user-friendly, easily navigated portal that will allow visitors to generate custom reports detailing government expenditures and performance across entities and programs.  This will include links to pre-approved and final contracts describing the nature of the service provided, audits performed, subsidies and tax credits* provided, and tax dollars spent.

Additionally, the database will include a performance monitor that includes information on jobs created, revenue generated, and other performance metrics. The public will be able to do a side-by-side comparison of costs, subsidies, etc. versus jobs created, revenue generated, etc., allowing for a more accurate cost benefit analysis of various projects.

Finally, the tool will allow users to track the location of all state contracts/projects sorted by legislative districts receiving incentives alongside geographical data noting unemployment and economic development needs across the state.

The Maryland General Assembly relies heavily on state agencies to develop and adopt regulations, yet state agencies are not required to make public meetings held between state employees and outside parties regarding the development of those regulations.  As a result, information regarding those who influence this process is currently not accessible or available.

We should adopt an Open Meeting Records Rule modeled after the disclosure requirements of the White House Office of Information Regulatory Affairs that will promote transparency in Maryland’s rule making process; and to comply with the rule, set up a user-friendly website that archives every meeting with outside parties (state or local governments, small business, special interests groups, etc.) when the meeting concerns state regulations under review. The information would include date of the meeting, attendees and a PDF scan of attachments provided by the outside parties.

4) Open Book.  Create a database that allows the public to explore state contracts awarded to corporations alongside campaign contributions made by that corporation, its officers or employees.

With this tool, Marylanders could easily discover when government agencies may be awarding contracts based on political connections.

5) Democracy Innovation Labs.  Host open source innovation labs and competitions in partnership with technology leaders and hubs including the Greater Baltimore Technology Council, iStrategy, OpenGov Foundation and others to develop technological tools that enable Marylanders to make the state more accessible, transparent and accountable to Marylanders.

6) Local Sunshine Challenge Grants.  Provide localities and counties infrastructure support to replicate and link local expenditure tracking to state portals.  The bulk of state expenditures are distributed by localities that have incongruent reporting at best.  Providing tools to local municipalities will encourage greater transparency and cost-benefit analysis at all levels of government.