A bill seeking to make the abuse of patients by their therapists a crime has brought together an unlikely team of legislators and a young woman who could have never imagined herself so immersed in state legislation, coined “Lynette’s Law,” HB 60.

Heather Lynette Sinclair, 27, turned to Maryland lawmakers in hope that she might be able to end an invisible chain of abuse within the mental health field.

“I didn’t even know what the General Assembly was when I started all this,” said Sinclair with a laugh. “I wasn’t even registered to vote.”

A victim of therapy abuse herself, Sinclair was horrified to find out that the Board of Professional Therapists and Counselors rarely held professionals criminally accountable for patient abuse. That included the man who had sexually abused her.

Sinclair’s own experience with therapy abuse was born from a complex and painful chain of events. The relationship with her therapist started with deep respect and trust. As her therapist sought to become more intimately involved in her life, the feelings of intimacy became confusing, and ultimately she realized that she was a victim of therapy abuse.

Looking back on it now, Sinclair can clearly identify ways in which her therapist took advantage of her vulnerabilities in order to build the confusing and insidious relationship.  At the time, she says, she really believed he was trying to help her.

“He already knew I had experienced trauma, he already knew I was a rape survivor who didn’t report it,” Sinclair explained. “And immediately after [the sexual abuse] happened he said ‘Oh I’m so sorry.  I’ve never done anything like that — there’s something about you that made me do that.’”

Sinclair said she realizes now that his reaction was very calculated.

“He set it up to be my fault because he knew that was one of my challenges going into therapy — I’ve always felt like the things that have happened to me have been my fault,” she said. “And it’s very common for therapists who abuse victims to make their patients feel special. That’s why they don’t tell.”

After the event, Sinclair did some digging. She came to find not only was she in an abusive therapist-patient relationship, but also that her therapist, Richard O’Meara, was a convicted felon — aggravated assault in Pennsylvania in 1989 — and had lied to her on numerous occasions in order to take advantage of her vulnerabilities.

In November 2011, Sinclair reported her therapist to the Board of Professional Counselors and Therapists. She also and came out publicly with her story, an act that inspired hundreds of patients across the country to reveal similar experiences with therapy abuse.

“It’s kind of like I’m taking one for the team,” said Sinclair. “Because they’re behind me, but they’re invisible to all these people.”

Sinclair turned to the General Assembly after months of working with the Board of Professional Counselors and Therapists to bring her abuser to justice. She realized that he would not go to jail due to the nature of the therapist-patient relationship that was established.

During the six month trial, Sinclair’s therapist threatened Sinclair, her family, and her new female therapist. The board ultimately decided not to refer his case to the authorities because they feared he would become violent. O’Meara voluntarily surrendered his license in a letter last July, saying the board had enough evidence to revoke it and that he had lied in his application for his licenses.

Violators of the law would be considered guilty of a fourth-degree sex offense, placed on the sex offender registry, and, for repeat offenders, subject to up to three years in prison.

The law also requires a criminal background check to license therapists — a measure which would have prevented Sinclair’s situation altogether.

A Question of Consent

The question of consent has been central to every hearing on this bill.

Should a therapist be convicted and placed on the sex offender registry if he or she has sexual relations with a consenting patient?

Is a person who is emotionally and mentally vulnerable capable of consenting to sex with a therapist who is manipulating their emotions and thoughts to that end?

The board classified Sinclair’s case as a consensual relationship, becnause Heather did not immediately try to put a stop to it.

After heated debate in the House, the bill passed unanimously, moving on to spark considerable discussion in the Senate Judiciary Committee last week. The primary opposition for the bill comes from the very body that is charged with protecting mental health clients and holding professionals accountable — the Board of Professional Counselors and Therapists.

“The Board of Professional Counselors and Therapists agrees that mental health professionals having a sexual relationship with their client is never, never appropriate, ethical, professional or right,” said Carol Deel, chair of the Board of Professional Counselors and Therapists. “We can and have taken disciplinary action against practitioners for engaging in this kind of behavior. We have revoked licenses and certificates for such sexual misconduct.”

Deel lobbied hard against this bill, suggesting that Sinclair was doing this for personal reasons and asserting that therapy abuse was a rare occurrence.

Some senators struggled to understand the motivations the board had for opposing the legislation.

“If you think this is wrong, why do you have a problem making it a law?,” Sen. Nancy Jacobs asked. “You can understand how it might appear like you are trying to protect your own.”

Deel explained that the law could put emotional stress on clients who are forced to appear at a criminal trial and that it would “undermine” the board’s current process, which she said is sufficient.

Richard Hann, former board chair, also made the case that the law could potentially cause an abusive therapist to become angry and violent as a result of the threat of criminal charges.

Hann also talked explicitly about the consequences the board  had imposed upon the man who abused Sinclair — revocation of his license and a letter of resignation that admitted to the things that he had done.

“The reason we did that was so that somebody who was giving up their privilege to be a professional was less likely to become violent in response to any kind of prosecution.”

Jacobs, clearly skeptical, questioned why a potentially violent sex offender should not be subject to criminal law.

Not all senators defended the bill, however.

Sen. Bobby Zirkin was put off by the fact that the law did not include an age-relationship clause, and he gave several examples in which a counselor or therapist might have an appropriate consenting relationship with a patient and, as a result, be incarcerated and placed on the sex offender registry.

“For the purposes of writing a law — this has an unbelievably wide net,” challenged Zirkin. “There is no discretion — there is no space for a judge to say: I know you broke the law, but I’m going to keep you off the [sex offender] registry.”

Lisae Jordan, general counsel for the Maryland Coalition Against Sexual Assault, suggested, in response to Zirkin, that legislators narrow the bill to apply only in situations where the patient is “emotionally vulnerable.”

Smigiel has since begun to consider a way to make this change — a change which would likely decrease legislative opposition and make the bill more specific to cases like Sinclair’s.

After session, Sinclair hopes to shift her focus towards opening up a center for victims of professional abuse —  a resource which state does not yet have.

To learn more about Sinclair and her efforts on Lynette’s Law, visit: http://www.lynetteslaw4maryland.com. 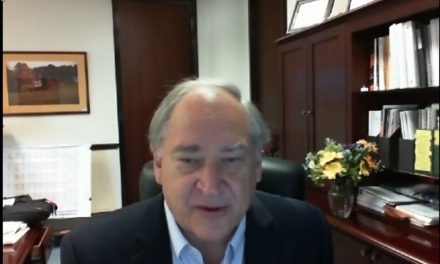