Fredericksburg, Texas — The Hill Country of central Texas seems a mighty unlikely place for the National Museum of the Pacific War. The nearest body of water, aside from a few creeks, is the Perdenales River, about five miles away.

But here the museum sits, in the middle of this flat burg settled in the 19th century by German immigrants.

“Willkommen,” say some of the signs and there are least three German restaurants on the main drag. The 104-year-old St. Mary’s Catholic Church has stained glass windows with inscriptions in German. Across the street the electronic sign outside St. Mary’s school flashes “Pray for rain,” a reminder that these parts, along with much of Texas, has been in drought for over a year.

Also on the main drag is the old Nimitz Hotel, the original site of the war museum and boyhood home of Admiral Chester Nimitz, commander-in-chief of the Pacific Theater, who shared those duties with General Douglas MacArthur.

Largest invasion of the war 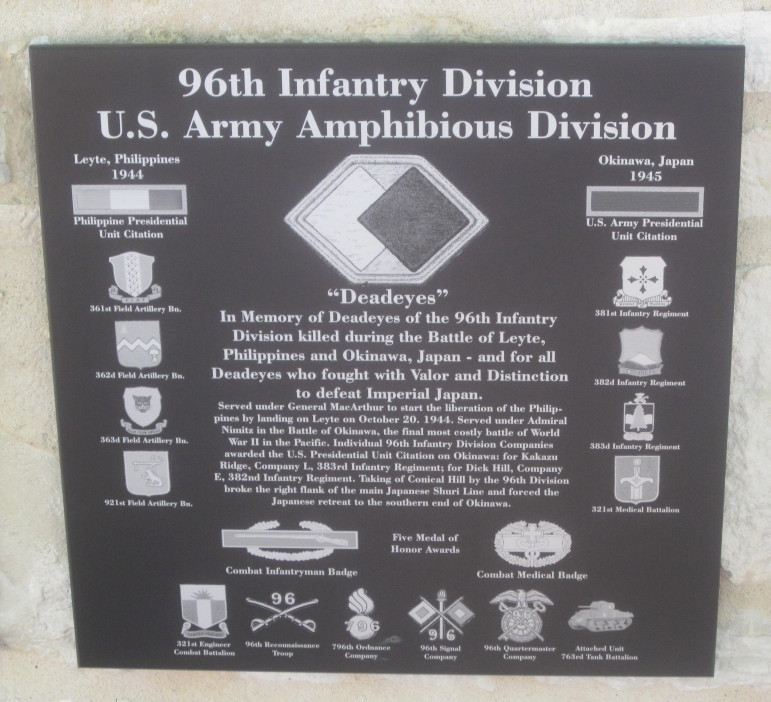 96th Infantry Division plaque in the courtyard of the National Museum of the Pacific War.

Sixty-seven years ago on Sunday, on April 1, 1945 — Easter Sunday that year— the largest amphibious invasion by American troops in World War II started on the island of Okinawa, 7,500 miles away – a larger U.S. force than at Normandy. Two Marine divisions and two Army divisions went ashore in the final big battle of the war.
We were here in Fredericksburg to remember that battle and the men of the 96th Infantry division who fought it by dedicating a plaque. Like most of the action in those subtropical climes in that island-hopping theater across the not-so-peaceable Pacific, it was fierce combat on inhospitable turf.

The Marines and Army fought the Japanese through the islands, but Okinawa was the first time they had fought them on land the Japanese considered part of their homeland. It was not the sort of battle you want to depict in movies or TV; in fact the only long treatment of Okinawa is in the next to last segment of HBO miniseries “The Pacific.” 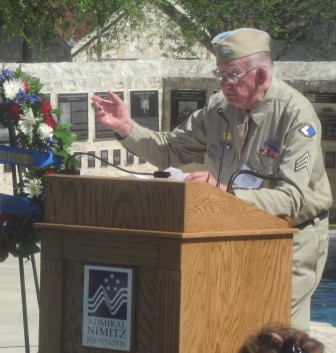 But I’ll let my father, Sgt. Leonard W. Lazarick, Sr. tell part of the story, as he did in a short speech Saturday.

“It is impossible in the time during these ceremonies to describe much of the horror that took the lives of 234,000 human beings. That was more than died from two atomic bombs. President Truman knew the numbers when he stated, “I don’t want another Okinawa.” (Americans killed in action at the battle totaled 14,006, including those who died from their wounds.)

“I want my talk to focus on the intensity of the Japanese artillery… the largest concentration of heavy weapons and firepower in the Pacific Campaign. …The entire southern end of the island was zeroed in for maximum effectiveness. All this firepower was concentrated in about 120 square miles or about twice the size of Washington D.C.

“The Japanese almost always held the high ground and could put a shell into your hip pocket. One night, with a single round, they hit our battalion ammunition truck, setting it afire, and it finally blew up entirely, sending debris into foxholes and wounding numerous soldiers. The Japanese were also expert at hiding their weapons in caves—rolling them out to fire on their targets and pulling them back into safety. Every night they would drop some shells on our lines.

“The shelling eventually took its toll on some veteran soldiers who suffered from combat fatigue (today known as post traumatic stress disorder). There were 26,000 recorded non-battle casualties on Okinawa– Army and Marines. My guess is that many were combat fatigue cases based on what happened in the 96th Division; 884 soldiers were infected by the invisible wound.”

“Let us remember that it was the Japanese artillery on Okinawa that took the life of the commander of 10th Army [the overall command on the island], Lt. Gen. Simon Bolivar Buckner, and if my information is correct, the highest ranking Army officer to be killed in action in the entire Pacific War.”

Before my father’s speech, we had a talk from the head of the museum, Gen. Michael Hagee, who served as commandant of the Marine Corps. He emphasized the importance of telling the story of the Pacific and these brave men. It was a nice speech, but it would have been nicer still if the audio-visual exhibit about Okinawa inside the museum had emphasized that the Army was a crucial part of the action taking the southern part of the island, my father pointed out.

We will not likely have more of these 96th Division ceremonies, as we did at Fort Benning, Georgia, two years ago. Only nine veterans of the battle attended this event. The survivors are now all in their mid-eighties or older, and get slower and frailer by the day.

There was an older gentleman standing in the shade of that 90-degree day in Texas, and after my dad’s speech, I asked him what had brought him there. It turns out his brother was killed on Okinawa, one of five brothers who had served in the war. The man eventually served in the 82nd Airborne, and took part in the European battle to capture bridges into Germany dramatized in the movie “A Bridge Too Far.”

Like many an old combat soldier, this man was no fan of our current wars and their constant deployments and endless fighting. Both Iraq and Afghanistan have dragged on twice as long as World War II. Bring the troops home, he said.

And then he headed back to Wichita Falls, Texas, six hours away.