Sunday is the 100th birthday of Ronald Reagan, 40th president of the United States and an iconic figure for Republicans who came of age during his presidency.

To mark the occasion, Republican delegates and senators have introduced bills to require the governor to annually proclaim a Ronald Reagan Day on February 6, and “urge the citizens of the state of Maryland to observe Ronald Reagan Day in a proper manner.”

The “proper manner” this year includes a birthday ball put on by the state GOP Saturday at the Turf Valley Resort in Ellicott City. The $100-ticket affair is supposed to be light on speeches and heavy on music and dancing to the sounds of “The Reagan Years,” a local band that “recreates the sounds of the 1980s.”

Sen. Chris Shank, a Washington County Republican who was in elementary school when Reagan became president, is lead sponsor in the Senate. He said Reagan “is a model for what our nation is yearning for. He is as a model for troubled times, for strong visionary leadership.”

Shank had not heard the commentators’ description of last week’s State of the Union address by President Obama as “Reaganesque.” The current president is supposedly reading a Reagan biography by Lou Cannon.

Some of the “whereas” clauses in the bills have a political tinge:  “In 1981, when President Reagan was inaugurated, he inherited a disillusioned nation shackled by rampant inflation and high unemployment,” it says. “During his presidency, President Reagan worked in a bipartisan manner to enact his bold agenda of restoring accountability and common sense to government which lead to an unprecedented economic expansion and opportunity for millions of Americans.” 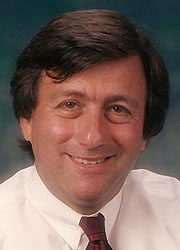 Miller time: The Senate president and his wife’s wildest dreams