Department of Business and Economic Development Secretary Christian Johansson hopes to help businesses grow this year through a model that sells tax credits and uses the funds generated as grants to growing companies.

The program, called Invest Maryland, leads the list of DBED’s initiatives for the new year, Johansson told a group of reporters last month. It will be proposed in legislation to set up the program in this year’s General Assembly.

Johansson said that this program will help Maryland grow economically from the inside – something that Maryland is in a unique position to be able to do, but has not been doing effectively enough.

“The states who do better are the ones who do organic growth better,” he said. “We are trying to be as creative as we can.”

The Invest Maryland program would be a public-private partnership based on a model that several other states have used. To start the program, Johansson said he’d like to raise $100 million for the Maryland Venture Fund, used to help invest in growing companies. To get that money – without having to pull from the state’s already stretched finances – the state would sell tax credits to insurance companies.

Basically, insurance companies would start purchasing tax credits at a set rate – like a credit for 70 cents per dollar in taxes. The income from the tax credits would go directly into the Maryland Venture Fund now, but the tax credits themselves would not kick in until 2015, meaning the state’s income would not be impacted for four years.

Johansson said that the benefits of this program will be worth the state’s eventual financial hit. The grant money can be used to make state companies more competitive and better established. Additionally, he said, it can be used to encourage minority and green business growth.

Maryland’s Venture Fund has been used for economic investment before, but the contributions had come from the state’s general fund. The last time state money was put into the Venture Fund – an initial deposit of $25 million – Johansson said that the state reaped $61 million from its investment.

“We had a heck of a run at it,” Johansson said.

While Johansson did not have any estimates of the outcomes of the proposed Invest Maryland program, he said that it could help hundreds of companies create thousands of jobs. New jobs in turn create more state revenue through income, corporate and property taxes, making it a “triple return for the state,” Johansson said. 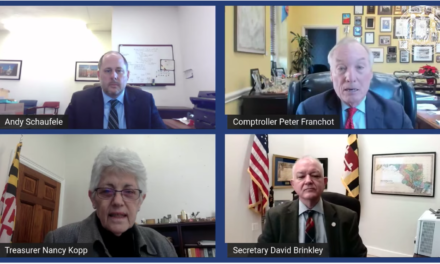