SEXUAL ASSAULT BILLS: The Maryland Senate will consider two bills aimed at improving the prosecution of rape cases, reports Pamela Wood for the Sun. The Senate’s Judicial Proceedings Committee approved a bill Thursday that would change the legal definition of rape so that proving the victim resisted would no longer be required. The committee also approved a bill that sets standards for how long police departments must hold on to rape kits.

PENSION REFORM PLANS: With no pension reform plans offered by Democrats this session, a group of GOP lawmakers highlighted plans they’ve introduced this session that are modeled after Montgomery County, the federal government and plans enacted in other states. Two of the plans would cut nearly $6 billion in future obligations, according to the fiscal analysis by legislative staff, reports Daniel Menefee for MarylandReporter.com.

LESS TESTING: Lawmakers and educators testified Wednesday before the Senate Education, Health, and Environmental Affairs committee in favor of the Less Testing, More Learning Act — legislation sponsored by Sen. Roger Manno, D-Montgomery, that would limit standardized testing to 2% of class time, or about 21.6 hours for elementary and middle schools and 23.4 hours for high school each school year, Brianna Rhodes of CNS reports. 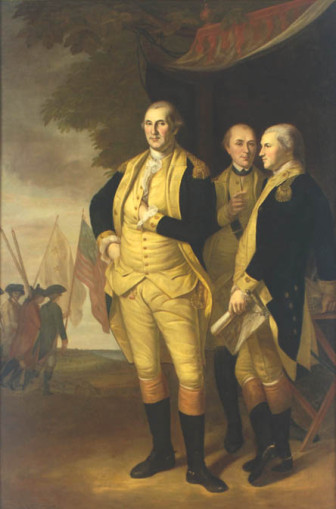 This painting titled “Washington, Lafayette and Tilghman at Yorktown” by Charles Willson Peale has hung in the State House since 1784 and is likely worth over $20 million.

SCHOOL DAY FLEXIBILITY: Closing schools for Presidents’ Day could become optional for Maryland school districts under a bill being considered in the General Assembly. The same could happen to Easter Monday, writes Ovetta Wiggins in the Post.  Concerned about Gov. Larry Hogan’s 2016 executive order requiring the state’s 24 school districts to start classes after Labor Day and end by June 15, several state lawmakers want to give local jurisdictions flexibility by removing Presidents’ Day and Easter Monday from the state’s list of mandatory public school holidays.

ACLU COMPLAINS ABOUT FB DELETIONS: The ACLU of Maryland contends Gov. Larry Hogan’s deletion of Facebook comments is tantamount to censorship. The civil rights organization sent the Republican governor a letter Friday outlining its legal argument and said Hogan’s actions also violate the state’s social media policy. The ACLU also asked the governor to reinstate seven ACLU clients who have been banned under threat of lawsuit, Erin Cox of the Sun writes. Hogan’s staff said in a statement they reinstated six out of the seven people, but could not find a Facebook profile for the seventh.

OYSTER CONFLICTS: Some of the Chesapeake Bay’s most densely populated oyster sanctuaries could be opened to periodic harvesting under a plan being floated by state officials, setting up more conflict between alarmed environmentalists and watermen seeking to make a living. Neither side is pleased with the first draft of a new map of sanctuary boundaries in Maryland’s share of the bay, Scott Dance of the Sun reports.

BREWERY RULES: State lawmakers are faced with competing proposals to change the rules for breweries, which have exploded in popularity in recent years as drinkers turn away from mass-produced corporate beers in favor of craft brews. Pamela Wood of the Sun writes that there’s a big new player in the debate this year: Diageo, the international liquor giant that owns the Guinness beer brand and plans to open a brewery and taproom in an old rum bottling plant in Relay.

FRACKING LOSES CACHE: While fracking is set to become legal in October, state lawmakers are considering a permanent ban. But even if they don’t prohibit the controversial practice, energy companies and industry analysts say the falling price of natural gas and the expected costs of complying with stringent state regulations have made it less appealing, Scott Dance of the Sun writes.

HOGAN BLASTS FROSH RESOLUTION: Brian Witte of the AP reports that Gov. Larry Hogan sharply criticized on Friday a resolution passed by the General Assembly this week to empower the attorney general to sue the federal government without his permission — a resolution swiftly approved by the Democratic-led legislature due to concerns that President Donald J. Trump’s policies could hurt Maryland. Hogan, speaking on WBAL-AM’s “The C4 Show,” described the resolution as “horrible” and “crazy.”

LIQUOR BILLS UP FOR HEARING: Today marks an annual tradition for the General Assembly: It’s “Liquor Day,” when dozens of bills proposing to change the state’s hodgepodge of liquor bills are up for a hearing. Of the 62 bills on the agenda for the House’s Economic Matters committee, many are proposals to broaden local liquor license regulations, Amanda Yeager writes in the Annapolis Capital.

REVITALIZATION FUNDS: For the past few years, Del. Brett Wilson has been trying to get legislation approved that would offer a new financing option for communities attempting to redevelop their downtowns. The plan would allow cities and towns that meet certain criteria to create Community Revitalization and Improvement Zones where the potential tax income from new development could be used as collateral to finance new projects. The proposal had some problems, writes Tamela Baker for the Hagerstown Herald Mail, but it has been retooled and will be proposed again.

TAX BREAKS FOR DEVELOPERS IN ARUNDEL: Anne Arundel County’s state delegation on Friday endorsed a bill that would allow the county to offer tax breaks to commercial developers whose projects offer a public benefit — but not without imposing some limitations on the proposal first, reports Amanda Yeager for the Annapolis Capital.

PUGH SEEKS ED BOARD CONTROL: Baltimore lawmakers in the House of Delegates endorsed a bill Friday that would give the mayor sole control over appointments to the city’s school board — a measure Mayor Catherine Pugh has called her top priority for the legislative session, Ian Duncan of the Sun reports. Under the current system, the Baltimore mayor and the governor share a role in picking and removing the board’s members. Karen Stokes, a lobbyist for Pugh, called that arrangement, which was created in 1997, “outdated.”

BWI CHIEF CRITICIZED: Michael Dresser of the Sun writes a federal agency has made a preliminary ruling that the chief executive at BWI Marshall Airport, while in his previous job, retaliated against a whistle-blower who reported runway safety concerns to the Federal Aviation Administration.

HOYER SPEAKS TO STUDENTS: With Congress going on recess, Rep. Steny Hoyer and other Maryland legislators are gearing up for a slew of public meetings and talks to focus on a litany of issues, Phil Davis of the Annapolis Capital writes. For Hoyer, D-St. Mary’s, the Minority Whip took to Southern High School in Harwood on Friday to push the importance of “civic engagement” to two history classes.

BALTIMORE AS SANCTUARY: John Fritze of the Sun writes that President Donald Trump’s plan to cut off federal funding to sanctuary jurisdictions will be difficult to impose on Baltimore — a city that has sought to distinguish itself, and increase its population, with immigrant-friendly policies — according to several legal analysts who have reviewed the city’s procedures.

KACH STEPS AWAY FROM CHARTER PANEL: A Baltimore County Council member has withdrawn his name from legislation establishing a commission to review the county charter, citing possible conflicts of interest by some members of the panel, Alison Knezevich of the Sun reports. “I cannot in good conscience support a commission comprised of a large number of lobbyists who are currently on retainer with special interests that currently have issues before the County Government,” Wade Kach, a Cockeysville Republican, said in an email to constituents last week. “These special interests focus mostly on land use issues which comprise a large portion of the day to day operations of local government.”

BALTIMORE OFFICE VIOLATED OPEN MEETINGS ACT: The Maryland Attorney General’s office has ruled that the Baltimore Office of Promotion & the Arts is “a public body” that must hold its meetings in public and announce them beforehand, writes Fern Shen for Baltimore Brew. By failing to do so, the non-profit entity – which produces Artscape, the Martin Luther King Jr. Parade, and other cultural events and programs – violated the Maryland Open Meetings Act, according to a Feb. 1 opinion issued by the Open Meetings Compliance Board.