HOT SCHOOL AIR CONDITIONING ISSUE: The issue of air conditioning in public schools is expected to heat up again at today’s meeting of the state Board of Public Works, Pamela Wood writes in the Sun. The three-member board — which oversees state contracts — is scheduled to give the final OK to a policy that would allow state money to be used for portable air conditioners, a policy that the General Assembly took action to block. That set up a potential battle between the Board of Public Works and the legislature over who gets the final say on how school construction money is spent.

CHANGING STANDARDIZED TESTS: Students in Maryland are one step closer to potentially shorter standardized tests and more projects. The Commission to Review Maryland’s Use of Assessments and Testing in Public Schools met again Tuesday, though no official decisions were made about the future of standardized tests, reports Rachel Bluth in MarylandReporter.com. 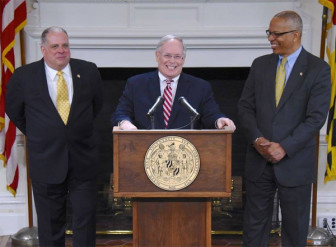 NEALL TO REORGANIZE STATE GOV’T: Former Anne Arundel County Executive Robert Neall has been hired to lead an effort to reorganize Maryland’s “unwieldy and unmanageable” state government, Gov. Larry Hogan announced Tuesday. Neall, who also has served as a senator and a delegate in the General Assembly, is being tasked with a broad mission to review the state government and recommend ways to make it more efficient. Neall is respected on both sides of the aisle as one of the state’s sharpest minds on fiscal matter, Pamela Wood reports for the Sun.

196 BILLS SIGNED: Gov. Larry Hogan signed 196 bills into law on Tuesday, including one that advocates say will provide “the most comprehensive insurance coverage for contraception in the country,” writes Ovetta Wiggins for the Post.

THERAPY DOG STUDY: Among the sea of faces in Gov. Larry Hogan’s reception room for Tuesday’s bill signing was a yellow, furry one, with droopy ears and gentle brown eyes. Kilo the therapy dog was there with his owner, Harford County Det. Carey Gerres, to celebrate a new law creating a pilot program in Anne Arundel and Harford counties that will study bringing dogs into the courthouse to work with child witnesses, Amanda Yeager of the Annapolis Capital reports. The story is topped by a short video.

LYME DISEASE WARNING: Patients worried they may have contracted Lyme disease soon will receive a new warning when they go to the doctor, writes Danielle Gaines in the Frederick News Post. A bill signed Tuesday in Annapolis will require health care providers and medical laboratories that draw blood for a Lyme disease test to give patients a written statement. The statement will explain that current tests for the vector-born disease can lead to false-negative findings.

NEW BLOW DRY LICENSES: On Tuesday, Gov. Larry Hogan signed a bill into law that will create a limited license for people who want to enter the part of the beauty industry that allows for “dry bars,” being an expert at blow drying hair — as well as put on a full social experience — without spending the time and money to go to beauty school, Anamika Roy reports for the Daily Record.

LEGISLATORS BACK SYRIAN RESETTLEMENT: Martin Weil of the Post reports that an advocacy group said Tuesday that 76 members of Maryland’s General Assembly have written to Gov. Larry Hogan to endorse the settlement of Syrian refugees to the state. Proposals for resettlement of Syrians in Maryland have been controversial, and Hogan has said he would ask the federal government to halt such relocations in the state.

HOGAN NIXES SPECIAL SESSION: Marylanders hoping for an income tax break will have to wait until at least next year after Gov. Larry Hogan closed the door on holding a special session of the General Assembly, Pamela Wood reports for the Sun. Hogan said Tuesday he hopes to work with lawmakers on a tax cut package next year. An attempt to enact the first major income tax cut in more than two decades failed in April when negotiations between the Senate and House of Delegates fell apart on the final day of the annual 90-day session.

PART 3: PLEA DEALS INSTEAD OF DATA: In Part 3 of CNS’s investigation into secret cell phone tracking, Courtney Mabeus reports in MarylandReporter.com that its investigation reveals that sometimes prosecutors have decided to offer plea deals in otherwise strong cases rather than disclose the use of cell site simulators. “That’s something that law enforcement has to account for, that they’re putting secrecy ahead of public safety,” said the ACLU’s David Rocah. “You cannot say that these things are critical to public safety and then sell out public safety in the same breath.”

MAYORAL RACE & RACE: State Sen. Catherine Pugh prevailed in the Democratic primary after winning most of the precincts with a majority white population and few of the majority African-American precincts, a data analysis shows, Yvonne Wenger and Luke Broadwater report for the Sun. Pugh narrowly defeated former Mayor Sheila Dixon, who had broad appeal in predominantly African-American areas of the city.

RECOGNIZING WOMEN WWII PILOTS: A bill passed the U.S. Senate unanimously Tuesday to allow women who flew domestic missions during World War II to be inurned (buried in an urn or interred) at Arlington National Cemetery. More than 1,000 women — including 14 Marylanders — flew noncombat military missions for the Women Airforce Service Pilots during the war. The WASPs delivered war planes, ferried cargo and towed targets for other pilots.  Sen. Barbara Mikulski introduced the legislation to reinstate the inurnments, writes Tim Prudente for the Sun.